Grand claims have been made for the potential of 3D printing for nearly 20 years, but is the technology now on the brink of being truly world-changing? 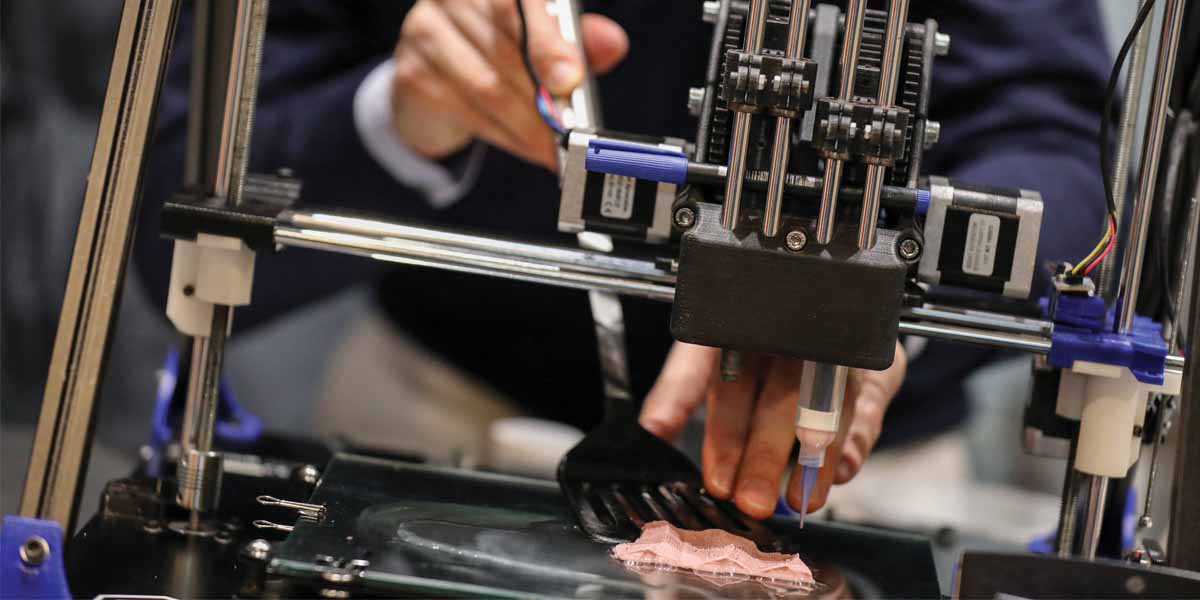 In 1999 an eight-year-old schoolboy at the Boston Children’s Hospital in America underwent pioneering transplant surgery that changed his life and inspired new research that could change thousands more.

Luke Massella was born with spina bifida and had already survived a dozen operations when his kidneys began to fail. Dr Anthony Atala and his team built a biodegradable scaffold for a new bladder. Using cutting-edge technology of the time, they encouraged cells from Luke’s bladder tissue to grow around the scaffold to build a new, healthy bladder.

The success of the groundbreaking operation opened the eyes of Atala’s team and the medical world to the potential for this type of transplant. But the process was slow. The challenge was to speed and scale up the manufacturing processes to create these engineered tissues and organs.

“It is estimated that every 30 seconds a patient dies from a disease that could be treated with tissue replacement,” says Atala. “There are simply not enough donor tissues and organs to meet demand. Regenerative medicine offers the hope of engineering replacement organs in the lab to help solve this shortage. Because these organs are made with a patient’s own cells, there is no issue with rejection.”

At the time there was much speculation in the media about the potential for 3D printing. Atala and his team started experimenting — first with a simple desktop inkjet printer. Eventually they created their own proprietary 3D printers.

“We have printed bone, cartilage and muscle tissue that, when implanted in experimental models, develops a system of nerves and blood vessels.”

Today Atala is the director of the Wake Forest Institute for Regenerative Medicine in North Carolina. After 14 years of intense research the team are close to being able to 3D print a range of body parts for transplant. Atala says: “We have printed bone, cartilage and muscle tissue that, when implanted in experimental models, develops a system of nerves and blood vessels. These structures have the correct size, strength and function for use in humans, proving the feasibility of printing living tissue structures to replace injured or diseased tissue in patients.

“We are developing cell therapies and replacement tissues and organs for more than 40 different areas of the body, including cartilage, bladders, muscle and kidney organs.”

It is not just internal body parts being bioprinted. Researchers at New York’s Rensselaer Polytechnic Institute have developed bioprinted skin, to be used in place of skin grafts. Conventional grafts are currently the most effective treatment for burn victims, but they come with downsides. The grafts need to be taken from elsewhere on a patient’s body, such as the thigh. The skin can scar badly, recovery is lengthy, and the graft tends to fall off eventually instead of integrating with the host cells.

Bioprinted skin, on the other hand, can be created more quickly than conventional grafts and applied straight to the wound, allowing significantly better recovery. This skin also features functional blood vessels, which grafts usually lack, meaning it has a much greater chance of integration with the existing skin.

There are potential applications for bioprinted skin outside the medical field. It could enable skincare and make-up products to be tested without using humans or animals. It could even provide realistic canvases for tattooists in training — and prevent them from practising on reluctant friends.

Elsewhere, 3D printing is helping people who have lost limbs, with the printing of tailor-made prostheses that fit perfectly.

Hideo Kodama, of the Nagoya Municipal Industrial Research Institute, was the first person to produce an account of how resins that hardened when exposed to UV light could be used to create solid prototypes. His paper, published in 1981, laid the groundwork for 3D printing.

In July 1984 a team of French engineers filed a patent for 3D printing technology — only to abandon the endeavour, as there was little interest in the technology “from a business perspective”.

Three weeks later American inventor Charles ‘Chuck’ Hull filed the first successful patent for ‘stereolithography’ — the successive printing of thin layers of ultraviolet curable material, one on top of the other, to make solid objects. He founded 3D Systems in California and in 1987 released the world’s first 3D printer, the SLA-1.

Early printers were expensive, and objects were difficult to perfect — often warping as the material cooled and hardened. 3D printing had a way to go before making mainstream news. The first printers became commercially available in the mid-2000s. Groundbreaking developments have since been made within several industries, extending far beyond medicine.

One of the most exciting applications for 3D printing in other industries is in construction. New Story, a not-for-profit organisation based in California, working with specialist builders ICON and ÉCHALE, has begun building the world’s first 3D-printed housing in Tabasco, Mexico.

“Machines squeeze out a cement-based mix — it looks like grey icing sugar being squeezed out of the nozzle of an icing bag — layer by layer until a wall is built.”

Two out of 50 500 sq ft homes have been completed so far, each taking only 24 hours to ‘print’. Machines pump out a cement-based mix — it looks like grey icing sugar being squeezed out of the nozzle of an icing bag — layer by layer until a wall is built.

These homes will be occupied by vulnerable families currently living in extreme poverty. They have been designed with the specific needs of the community in mind.

An estimated 2% of the global population — nearly 154 million people — is homeless. Another billion do not have adequate shelter. Housebuilding is usually an expensive and time-consuming process, which poses an obstacle to providing permanent homes for those in need. New Story and its partners believe 3D-printed houses offer a solution.

“Conventional construction methods have many baked-in drawbacks and problems that we’ve taken for granted for so long that we forgot how to imagine any alternative,” says Jason Ballard, co-founder of ICON.

“With 3D printing, you not only have a continuous thermal envelope, high thermal mass and near-zero waste — you also have speed, a much broader design palette, next-level resiliency and the possibility of a quantum leap in affordability. This isn’t 10% better — it’s 10 times better.”

3D-printed houses have lower labour costs, as only one person is required to monitor the printer. And the ability to build a structure in a day speeds up the construction process considerably. The average house takes four to six months to build.

It is also more environmentally friendly. Concrete production is one of the most significant pollutants involved in the housebuilding process — 3D printing wastes less material.

Now 3D printing has reached the food industry. Israel-based Redefine Meat is printing animal-free ‘meat’ that has the same appearance, texture and flavour of animal meat — right down to the blood and fat.

The problem most alternative meat manufacturers face is that eating meat is not solely about taste and texture — it is a complicated, sensory experience. 3D printing allows Redefine to recreate complex structures that are found only in animal muscle, precisely replicating each fibre to create whole cuts of meat. The company claims its products have a 95% smaller environmental impact than animal meat.

Redefine has created alternative tenderloin, rib-eye and sirloin steaks, just by changing the digital file of the products.

The future of fashion

Danit Peleg is a designer pioneering 3D-printed fashion. In 2015 she became the first designer to produce an entire collection by using desktop 3D printers for her graduate project.

Now she is launching the first online 3D-printed clothing store, allowing customers to purchase digital files of garments, customise the measurements and then download them at their nearest 3D printer. The files come with assembly instructions. While some may be put off by the idea of constructing their clothes, Peleg’s work is an exciting indication of the future of fashion. We have conquered Ikea bookshelves — how hard could a jacket be?

The benefits of 3D-printed fashion include the small batch sizes. These could reduce waste, as brands will not have to commit to huge inventory orders that may not sell. And if stock does sell out then customers will not have to wait weeks for the next shipment — only 24 hours for the garment to be printed.

A huge benefit for many would be the customisation options. Bodies come in various shapes and sizes, but clothes are usually made to fit a handful of measurements. 3D-printed clothing offers custom sizing without the expense of a tailor.

“With 3D printing, you have speed, next-level resiliency and the possibility of a quantum leap in affordability. This isn’t 10% better — it’s 10 times better.”

The possibilities of 3D printing are not limited to purely practical applications, as artists like Jeremy Burnich demonstrate. The founder of Joy Complex — a “content studio and showcase of joy” — created a conductor’s baton from the visual representation of sound waves to commemorate Beethoven’s 244th birthday. The baton was crafted using the first four notes of Symphony No. 5.

The advances made in 3D printing in the 40 years since the first failed patent are astonishing. From life-changing organ transplants to a print-at-home dress, additive manufacturing technology continues to influence myriad industries. In every sense, it is shaping our world.