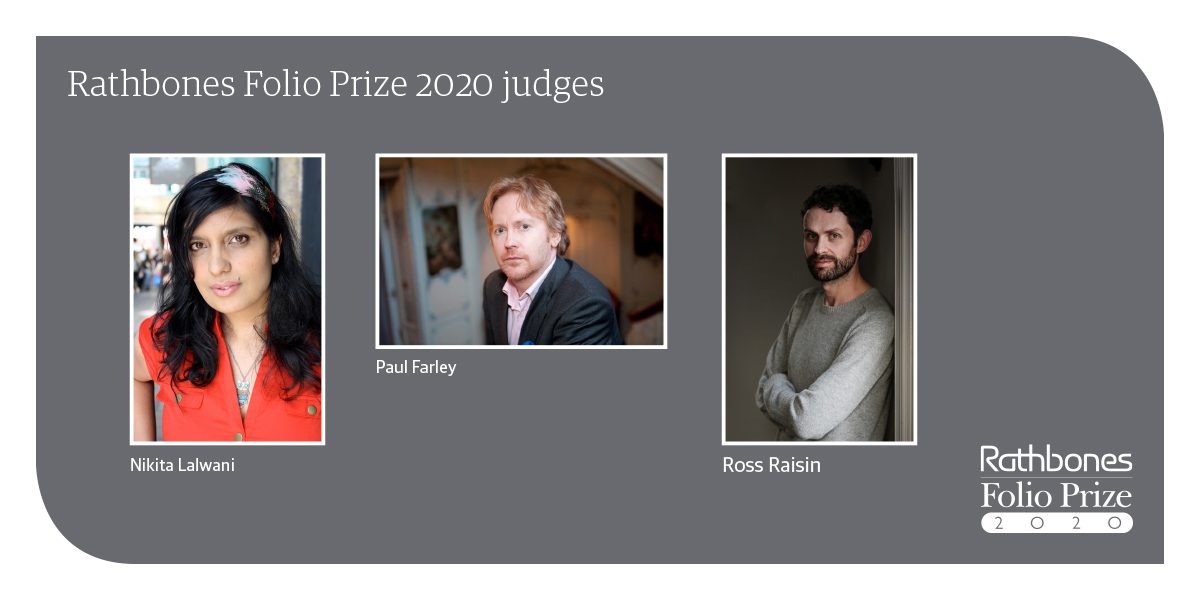 The multi award-winning poet and non-fiction writer Paul Farley, the Desmond Elliot Prize-winning novelist Nikita Lalwani and Ross Raisin, a Sunday Times Young Writer of the Year and Granta Best of Young British Novelists winner, have been announced as the judges for the 2020 Rathbones Folio Prize.

The £30,000 Prize – which rewards the best work of literature of the year, regardless of form – further announced that it is moving its timeline towards the beginning of the year, ahead of both the Women’s Prize and the International Booker Prize: the shortlist will now be announced on 25 February and the winner on 23 March.

The Rathbones Folio Prize, also known as the ‘the writers’ prize’, is the only award governed by an international academy of distinguished writers and critics. The judges, alongside their Academy peers, ensure a unique quality and consistency in the nomination and judging process.

Paul Farley, Chair of Judges, said: “I’m so excited to be chairing the Rathbones Folio Prize panel this year. We’re living through many welcome changes in the literary landscape and hearing from a greater variety of voices, while the distinctions and divisions between genres somehow seem more permeable than ever. This prize is unique in the way it asks a community of our fellow writers to nominate a list for my fellow judges and me to consider, and also in the way it allows all genres into the mix. Good books are always good in surprising, unpredictable, challenging ways and I’m looking forward to our total immersion in reading as the nights draw in, with the certain prospect of finding an exceptional title to celebrate come the spring.”

In 2019, the judges awarded a poet for the first time since the prize was launched in 2013: Raymond Antrobus, from Hackney, east London, won for his debut collection The Perseverance. Published by small independent publisher Penned in the Margins, his collection has seen a 150% uplift in sales since the announcement was made in May.

The prize money increased to £30,000 and 2019 also saw the significant expansion of the ambitious Rathbones Mentorships and Sessions programmes.

The Rathbones Folio Mentorships – launched in 2018 in partnership with First Story – pair four writers with four gifted young writers from disadvantaged background for one-to-one creative writing tutoring over the course of a year. With no equivalent creative writing mentorship scheme in the UK, the programme will be further developed in 2020, with the creation of a mentor and mentee alumni network to provide ongoing support for graduates.

As in previous years, the shortlisted authors will join the judges on the eve of the prize ceremony to take part in a Rathbones Folio Sessions day at the British Library.

Paul Farley (chair) was born in Liverpool and studied at the Chelsea School of Art. He has published four collections of poetry, and also written non-fiction books, including Edgelands (with Michael Symmons Roberts), as well as editing a selection of John Clare’s poetry. A Fellow of the Royal Society of Literature and a frequent broadcaster, he has received numerous awards, including Sunday Times Young Writer of the Year, the Whitbread Poetry Award and the E.M. Forster Award from the American Academy of Arts & Letters. His latest collection, The Mizzy, is published this year.

Nikita Lalwani was born in Rajasthan, India, and raised in Cardiff, Wales. Her first novel, Gifted, was longlisted for the Man Booker Prize, shortlisted for the Costa Award and won the Desmond Elliot Prize (after which she donated her prize money to the human rights organisation, Liberty). Her next novel, The Village, was also widely acclaimed, and her new novel, You People, will be published by Viking Penguin in June 2020. She is a Fellow of the Royal Society of Literature.

Ross Raisin Ross Raisin was born in West Yorkshire. His first novel, God's Own Country, was published in 2008 and was shortlisted for nine literary awards, including the Guardian First Book Award and the John Llewellyn Rhys Prize. In 2009 Ross Raisin was named the Sunday Times Young Writer of the Year and in 2013 he was selected as one of Granta's Best of Young British writers. Two more celebrated novels, Waterline and A Natural, have followed. Ross is a Fellow of the Royal Society of Literature.