DFM, advisers and the revenue effect

Comforting for financial advisers will likely be that of all the findings from the Rathbones’ value of DFM report discussed so far, data which reveals the positive impact a third-party investment manager has on client relationships. 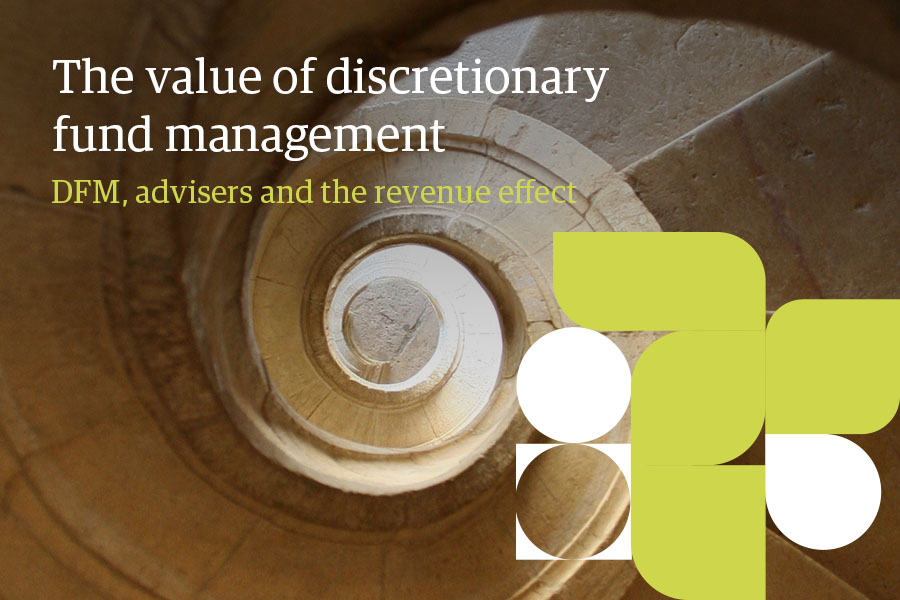 However, what will likely be music to some ears is evidence of the positive hit those improved relationships have on adviser fees, revenue and remuneration.

Impressively, advisers that adopted a DFM earned around £15,000 more per year than their non-adopter colleagues according to the report, boosted by a combination of increased client numbers, a wealthier client base and more time to spend on managing and meeting fee-paying clients.

The report revealed client numbers, a clear revenue generator, increased post-adoption for advisers surveyed in the report. More than half of advisers that took on a DFM saw client numbers increase, with almost one-in-five (19%) seeing client figures jump 20% or more. The gap between advisers with a DFM and those without was also clear, with adopters recording an average of 19 more clients than non-users.

The report’s survey not only killed off the misconception that an adviser which adopts a DFM would lose credibility, or damage their relationship with their clients, but also manages to demonstrate the tangible, revenue-generating benefits of the structure.

More than half (55%) of DFM adopters said their clients trusted them more, and a further 63% said the quality of their contact with them had improved. As a result, revenue and fees jumped for the average adviser that had adopted a third-party investment manager.

The typical client for an adviser with a DFM increased in size post-adoption, advisers said in the survey, with almost a third (32%) of the client base among advisers using a third-party investing more than £500,000 of assets, against 27% beforehand. Unsurprisingly, we find that just over three-quarters (76%) of advisers said they were happier with the composition of their client base since they began using a third party manager.

Additionally, fewer advisers sit in the mass-market space post-adoption, where profits have seriously lagged since the implementation of the Retail Distribution Review. The proportion of advisers who served the mass market fell from 30% to 23% once they adopted a DFM and were free to pursue higher net-worth clients.

A huge amount of value can be found by freeing up the time that would have previously been spent managing investments. Once using a DFM, 58% of advisers said they had been able to generate more paid time from existing clients. The proof is in the revenue. Advisers with a DFM detailed they were, on average, able to earn an hourly fee of £206 against an average of £196 for non-adopters.

While £10 on its own may not sound ground-breaking, the proof ultimately comes through in annual revenues. Users report an average annual revenue of £220,716 compared to just £181,940 for non-users – 21.3% more.

Despite non-adopters’ perception that using a DFM would do more harm than good to the core of an adviser’s business, it is clear from the report that the improvements to client relationships and the freedom advisers have to spend more time on managing those relationships has a real and immediate impact on business revenues.

The report also supports the argument that these benefits only appear to increase as time goes by.

By going into more detail on the impact a DFM has over time, something which will be explored further in a later blog, the report also reveals that the benefits of DFM adoption only increase over time. Advisers that were early to the DFM game and adopted a third-party six or more years ago were more likely to have recognised revenues increasing as a result of spending more time with clients, with 63% of ‘early adopters’ seeing this compared to 54% of those advisers who made the change in the last five years.