Sports scientists have made huge advances since helping Japanese swimmers to Olympic success in the early 1930s, but are we finally reaching the limits of human endeavour? 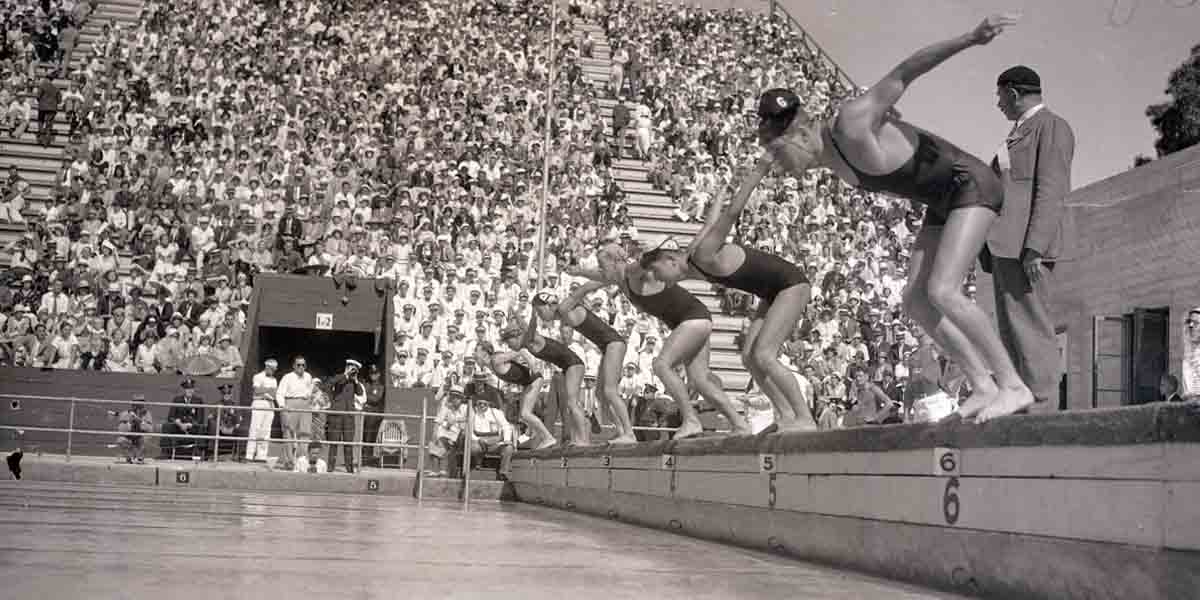 Many athletes preparing for this summer’s Olympic Games in Tokyo may not realise they owe a debt of gratitude to the Land of the Rising Sun. It was Japan’s swimming coaches who first put sports science on the map nearly 90 years ago.

Japan sent only a handful of swimmers to the 1924 Olympic Games in Antwerp. The country had so little interest in the sport that it boasted just two swimming pools. Then Yoshiyuki Tsuruta, who had grown up on the coast before joining Japan’s navy, won a gold medal in the 200m breaststroke at the 1928 Games in Amsterdam — and people back home began to take notice.

As participation in swimming boomed, Japan’s coaches began studying the techniques of the stars of world swimming — notably the US team, led by Johnny Weissmuller. Based on analysis of film of Weissmuller’s stroke mechanics, Japan’s sports scientists theorised that subtle changes might improve performance. They began coaching accordingly, and in 1932 Japan dominated the swimming events at the Los Angeles Olympics — picking up 12 medals, including five golds.

“The idea that a scientific approach to sporting endeavour can produce such dramatic results has not gone unnoticed.”

There have been many such breakthroughs in sports science. One modern-day equivalent of those Japanese pioneers is Peter Weyand, a professor in applied physiology and biomechanics at Southern Methodist University, Dallas. Weyand's work has revolutionised sprinting in athletics. “Twenty-five years ago,” he says, “there was no understanding of what was critically important in sprinting performance, so coaches didn’t know how to direct their training.”

Weyand’s research found that what really matters is not so much an athlete’s form but the force with which he or she can hit the ground on each stride. “The biomechanics of running turn out to be counterintuitive,” he remarks modestly of findings that helped athletes such as Usain Bolt to smash sprinting records.

The idea that a scientific approach to sporting endeavour can produce such dramatic results has not gone unnoticed: athletes and sporting bodies have embraced sports science with ever-increasing fervour. By the 2012 Olympics in London the English Institute of Sport was operating 15 high-performance centres across the country, with 250 specialists providing more than 4,000 hours of support to 1,500 potential British Olympians every week. That kind of investment produces results. The UK began investing in sports science at scale after a dismal showing at the 1996 Games in Atlanta, which produced just one gold medal. In London the UK won 65 medals, including 29 golds.

More broadly, sports scientists have supported record-breaking achievements. Roger Bannister broke the four-minute mile in 1954; within 45 years, thanks to modern coaching techniques and better equipment, the world record was down to three minutes 43 seconds — 7% lower. In the highly technical sport of swimming, the 50m freestyle record has fallen 12% in the past 45 years.

However, the advance of sports science gives rise to a tantalising question: is there a limit to the improvements possible? Many scientists think there is. Thirty years ago physiologist Michael Joyner published research on the science of long-distance running, concluding that the limitations of the human body meant the fastest theoretically achievable time for a marathon would be one hour, 57 minutes and 58 seconds.

More recently, physiologists have calculated that even if Usain Bolt had delivered perfect technique when in top condition he would only have lowered his 100m world record — currently 9.58 seconds — to 9.27 seconds.

“In many cases we are now reaching our limits,” says Dr Gary Brickley, a senior lecturer at the School of Sport and Service Management at the University of Brighton. “Records will keep falling, but it’s likely to be by smaller and smaller amounts, at least in the absence of breakthroughs we don’t yet know about — perhaps something genetic or a legal way to trick the brain into not registering pain or fatigue.”

It is about the bike

In fact, the biggest advances from today’s sports scientists are coming from their work on equipment. Two decades after Joyner’s research, the official world marathon best stands at two hours, one minute and 39 seconds; but last October the holder of that record, Kenya’s Eliud Kipchoge, ran the distance in one hour, 59 minutes and 40 seconds — much closer to the theoretical best. His breakthrough did not count for world-record purposes because the run was deemed to have been artificially enhanced. Kipchoge was supported by 42 pacemakers, had water and nutrition gels handed to him by coaches riding alongside him and, above all, wore a pair of prototype trainers now banned by World Athletics. 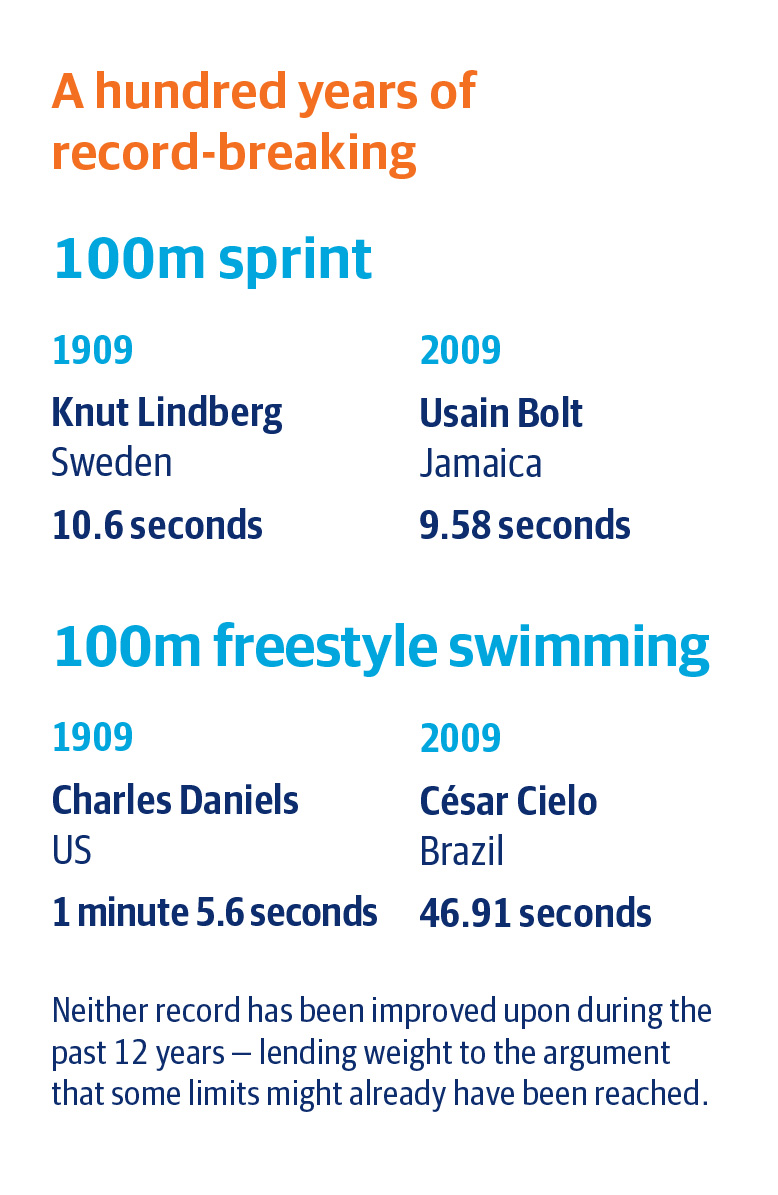 Those trainers are the latest in a long tradition of innovative equipment that has produced such dramatic gains that sporting bodies have felt compelled to intervene. Nike itself claims its Vaporfly range — of which Kipchoge wore an extreme version — can improve an athlete’s performance by 4%, a much bigger gain than any recent reduction in an athletics world record.

Swimwear manufacturer Speedo suffered a similar fate. Its LZR full-body swimsuit, designed in its ‘Aqualab’ in Nottingham, was banned after swimmers wearing the gear at the 2008 Olympics in Beijing smashed a series of world records.

Cycling is another sport where such controversies have raged. In 1997 the UCI, the governing body, changed the system governing its prestigious hour record — a simple test of how far someone can ride in 60 minutes. A year earlier Chris Boardman had asked engineering company Lotus to build the perfect bike for the task and had ridden 56.375 kilometres, smashing the previous record on a machine unsuitable for use elsewhere in the sport. The UCI introduced a new hour record, restricting competitors to equipment similar to that which Eddy Merckx had used to clock up 49.431 kilometres in 1972.

This is not to devalue the phenomenal ride put in by Boardman, who was given the UCI’s ‘Best Human Effort’ record instead. But the fact that no-one has since come near his mark underlines the reality that his record was a triumph of engineering as well as athletic prowess.

From where might the next gains come? “One interesting area is the recent work done on the metabolic rate of the human body and how to maintain performance,” says Brickley. “We’re seeing genetics knowledge evolving all the time, and we’re still learning about what’s possible through nutrition.”

Advances in other technologies are providing sports scientists with fertile new areas to explore. Sophisticated video analysis, combined with augmented and virtual reality tools, is helping coaches work on movement and technique more precisely than ever. Wearables provide a constant read-out of how the body is performing. Data and analytics tools give access to more information — and the ability to generate actionable insight from it.

Many of these technologies underpin the extension of sports science into team games, where performance is dependent on skills related to hand-eye coordination as well as athletic strengths such as endurance and speed. In football’s Premier League, for example, Arsenal now employ 15 people in their performance analysis and data science team. Globally, the sports analytics industry was worth $775 million in 2018 and is expected to grow by over 30% a year until 2025.

Still, sports scientists also express caution. “The concept of marginal gains is now coming under scrutiny,” says Dr Ibrahim Akubat, chair of the Sport & Performance division of the British Association of Sport and Exercise Sciences, the professional body for sport and exercise sciences in the UK.

The idea, championed by Sir Dave Brailsford, former performance director of British Cycling and general manager of the hugely successful Team Sky, is that making even very small improvements to factors that impact performance will, in aggregate, make the difference between failure and success. “That’s fine, but it overlooks the reality that the vast majority of performance comes from training in the right way, eating well and resting properly,” argues Akubat.

The other problem with marginal gains, Akubat points out, is that competitors quickly catch on. “Sam Allardyce pioneered sports science in football at Bolton Wanderers, and his incredibly progressive approach was initially very successful,” he says. “But then others caught up.” Bolton were relegated in 2012.

It is a reminder of another reality of sport: resources make all the difference in the end. If making it to the top of athletics or swimming, say, is impossible without a specialist in biomechanics, a nutritionist and a data analytics engineer, then athletes from large parts of the world stand little chance of competing.

“The problem with marginal gains is that competitors very quickly catch on.”

Sporting bodies may do what they can to redress the balance, but the truth is that sport is not fair. After all, some people are born with physiological advantages such as above-average lung capacity or superior fine motor skills. Ultimately, while all athletes should be on the start line as equals, the job of sports scientists is to give their charges every possible legal advantage.