New look for the High Street?

COVID-19 has delivered another blow to Britain’s retailers, and that will have an impact on the High Street. But the powers of creative destruction always generate fresh opportunities, too. Can the hearts of our towns and cities find a new life and raison d’être? 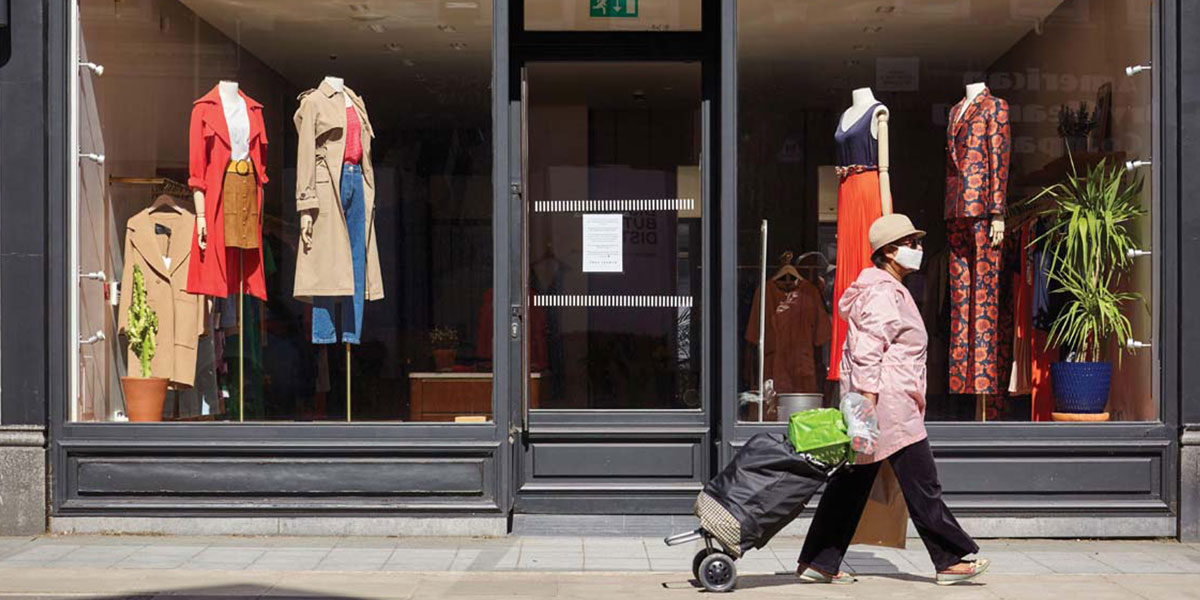 Cath Kidston had been one of the surprising retail successes of recent years, with its return to ’50s-style rose chintz designs on mugs, purses, aprons and even pet beds.

But the relentless challenge of cheaper online competitors and the drain of rates, rent and staff wages were taking their toll. The COVID-19 lockdown was the tipping point.

In April the company’s Hong Kong-based owner, Baring Private Equity Asia, called in the receivers. The fashion retailer will continue to operate online and retain its 100 stores around the world, but all 60 of its UK shops are to close at a cost of over 900 jobs.

Other big retail names to fall this year include a similar stalwart of House & Home-style magazine features, Laura Ashley; clothes retailers Oasis, Warehouse and Monsoon; and wine merchant Oddbins. Debenhams has called in the receivers — again — as it tries to avoid legal action by creditors to liquidate the 200-year-old business.

The Centre for Retail Research (CRR) estimates that lockdown, which has seen more than 40% of retailers closed for business completely, could cost the sector £17.28 billion in lost sales. This is having a knock-on effect for suppliers and property owners. UK shopping centre owners have seen struggling tenants withhold two thirds of rental income.

As lockdown lifts, businesses face fresh challenges. Restaurant and retail managements will be asking if the business model still stacks up in the near term. If safe distancing limits footfall or how many meals can be served it may not be worth reopening. There are lots of extra costs to consider, too — PPE equipment, screens, additional cleaning. It is hard to argue for a rent holiday to continue once open again, so many businesses may remain dormant.

This comes on top of poor Christmas sales, bad weather in February, a rising minimum wage and growing evidence to suggest that many of us have hit what many call ‘peak stuff’. For a variety of reasons, often environmental, we are looking to consume less, buying fewer but better-quality things.

Worse, lockdown has accelerated changes that were already taking place, most significantly the shift to online shopping. Ten years ago less than 7% of retail sales were online, according to the Office for National Statistics (ONS). This had risen to nearer 20% by the beginning of this year. By May 33.4% of retail spend was online.

The fear is that a lot of new online retail will stay there. Older shoppers who had been hesitant about ordering things online have been forced to during this crisis, and now many are converts.

The British Independent Retailers Association has forecast that one in five smaller shops will not reopen after the pandemic. Larger stores may reduce their footprint to shrink costs and could reduce choice as well — quietly simplifying product ranges, which will have an impact on suppliers.

With up to one in nine shops lying empty already and the number likely to rise, KPMG expects High Street retail to shrink by 25% by 2022/23 (it originally said by 2025). So what will happen to the empty stores?

Before the crisis, converting them to offices was considered an attractive solution. A £110 million plan to transform Birmingham’s 500,000 sq ft House of Fraser store was approved in December. It was expected to see most of the upper floors turned into offices — with potential for smaller shops, bars and restaurants on the first floor and basement. Whether that plan comes to fruition must now be in doubt. Lockdown has changed all our perceptions of remote working, and the era of the grand office may be over.

On the other hand, could this trend benefit smaller towns? Andy Pyle, Head of UK Real Estate at KPMG, says: “Companies now know that many tasks can be done very efficiently away from the office, so they’ll relook at how they use their space. I think there’ll be more space devoted to collaboration and creativity and fewer traditional banks of desks. We won’t necessarily see everyone working at home — rather, workspace will be provided closer to where people live, saving the commute. The overall effect is likely to be a moderate reduction in the total amount of office space but with significant changes to the types of space and where it’s located.”

“ Up to 400,000 new homes could be created by converting the upper floors of shops into apartments.”

Another option, perhaps, is housing. The Treasury estimates that up to 400,000 new homes could be created by converting the upper floors of shops into apartments. How many more homes could be created if the whole space was converted? PwC believes some large offices could end up as housing too. There is particular demand for social housing and specialist residential facilities for an ageing population. Charity Shelter says three million new social homes need to be built in England over the next 20 years to solve the current housing crisis. Whether Brexit will reduce that need is another matter. Offices and shops converted to homes in town centres may offer the benefit of an excellent public transport infrastructure, which can work well for disadvantaged and elderly households, as well as for younger workers who want to be close to the leisure facilities in centres.

The residential mix has to be carefully managed, of course. Julia Park, Chair of the Royal Institute of British Architects, says: “In principle, we can all agree that suitable new uses should be found for empty shops. And all reasonable efforts should be made to revitalise our High Streets and town centres. But this needs to be managed and executed skilfully. A number of commercial buildings, including shops, would make good gyms or community facilities; some would make good homes. But they need to be in sensible locations, not randomly interspersed among retail units, bars, clubs and charity or betting shops.”

Despite its woes, the High Street is arguably more resilient than the headlines suggest. The CRR estimates that more than 20,000 shops will close across Britain this year, at a cost of more than 235,000 jobs, but it is perennially gloomy. Last year it estimated that 16,073 stores failed, but auditor PwC estimated that the net decline in the first half of 2019 was just 1,234. New stores open, and failed stores are often reopened.

Take Oak Furnitureland, another recent casualty. It was immediately bought out of administration by a hedge fund. There will be some rationalisation, but many of its 105 showrooms are likely to be saved. It is a similar story for restaurant chain Le Pain Quotidien — 16 of its 26 stores are expected to reopen.

A High Street presence is still important to many retailers. In recent years fashion retailer Boden, which started life in 1991 as an online-only catalogue business, has opened two London stores and concessions in 34 John Lewis branches so that customers can try before they buy.

This can help reduce the costs of returns, which can gobble up a third of potential profits, according to IMRG, the UK’s online retail association. It says one in three online retailers has had to increase prices to counter rising returns volumes, as many shoppers over-purchase — perhaps to fill their basket sufficiently to qualify for free delivery — expecting to return unwanted items.

One in five customers orders multiples of the same item (different sizes and colours) to decide at home. The result is that on average nearly a quarter of online orders results in a return, and this rises to over 40% for some clothing retailers. Sometimes it is just easier to go into a shop and try the item on.

One retailer that has so far survived on the High Street is Next. Chief Executive Simon Wolfson was early in creating an online presence, with a speculative £7,000 experiment in 1999. Half of Next’s £2 billion worth of sales are now online.

Wolfson remains committed to the High Street. In fact, he is seizing an opportunity in the crisis to invest more. In May, despite the financial challenges of lockdown, which have led to a 41% drop in quarterly sales, he unveiled plans to launch beauty halls in shopping centres owned by property company Hammerson. Next sells more than 200 beauty brands. Wolfson said the halls would bring “our online business to life through premium store environments”.

Many experts say the secret to the survival of the High Street lies in making being there more enjoyable. If a vaccine for COVID-19 is found and we can make shopping safe then the priority will be to make the High Street somewhere worth visiting again. That may take investment. It will mean providing a mix of shops, restaurants, cafés and other leisure facilities, such as escape rooms. And it will mean embracing technology within shops to help compete with the online experience.

Interesting technology is emerging that may help — like virtual 3D mirrors, which show what a garment looks like from every direction and can even change its colour to save the customer trying a different one physically. Smart mirrors can request different sizes or products that can be delivered to the changing room, saving shoppers the hassle of dressing and undressing. They may even make clothing suggestions and show how we might look in a different item.

Stores can help themselves by refreshing lines more frequently, making them available instore first and making it easier to order sizes not in stock for home delivery. Self-checkout can reduce queues and costs.

“ There is still strong demand for discount stores — a rare bright spot.”

Meanwhile, there is still strong demand for discount stores — a rare bright spot. Aldi, Lidl and B&M have demonstrated that an appealing offer with low prices will bring shoppers in.

The High Street faced troubles before this crisis. COVID-19 has been a hammer blow to some of the plans to save it, but shopping is still a leisure pursuit for many people. Shops just have to do more to make people accept they need to be there.