Home › Insight › The opportunities and challenges of disruptive technologies

The opportunities and challenges of disruptive technologies

In June 2014, we held an in-house investment conference on disruptive technologies. With insight from external speakers from technology companies, investment strategists and specialist fund managers, we considered how technology will change how we live and how these changes might affect investors. It was a fascinating day.

Three years on, the terminology and buzzwords that were used at the conference are far more commonplace and some of the technology is already impacting on the behaviour of companies and consumers.

For example, cloud storage, 3D printing and solar energy are now more or less mainstream; the ‘internet of things’, big data and electric vehicles are shifting from development to the everyday; while other technologies, such as intelligent robots, designer medicine and nanotechnology, remain further away.

The sheer scale and speed of change that we face render any report on this revolution a daunting challenge. However, as professional investors, it is imperative that we understand how technology is changing the world and anticipate how investments may be affected, positively or negatively. 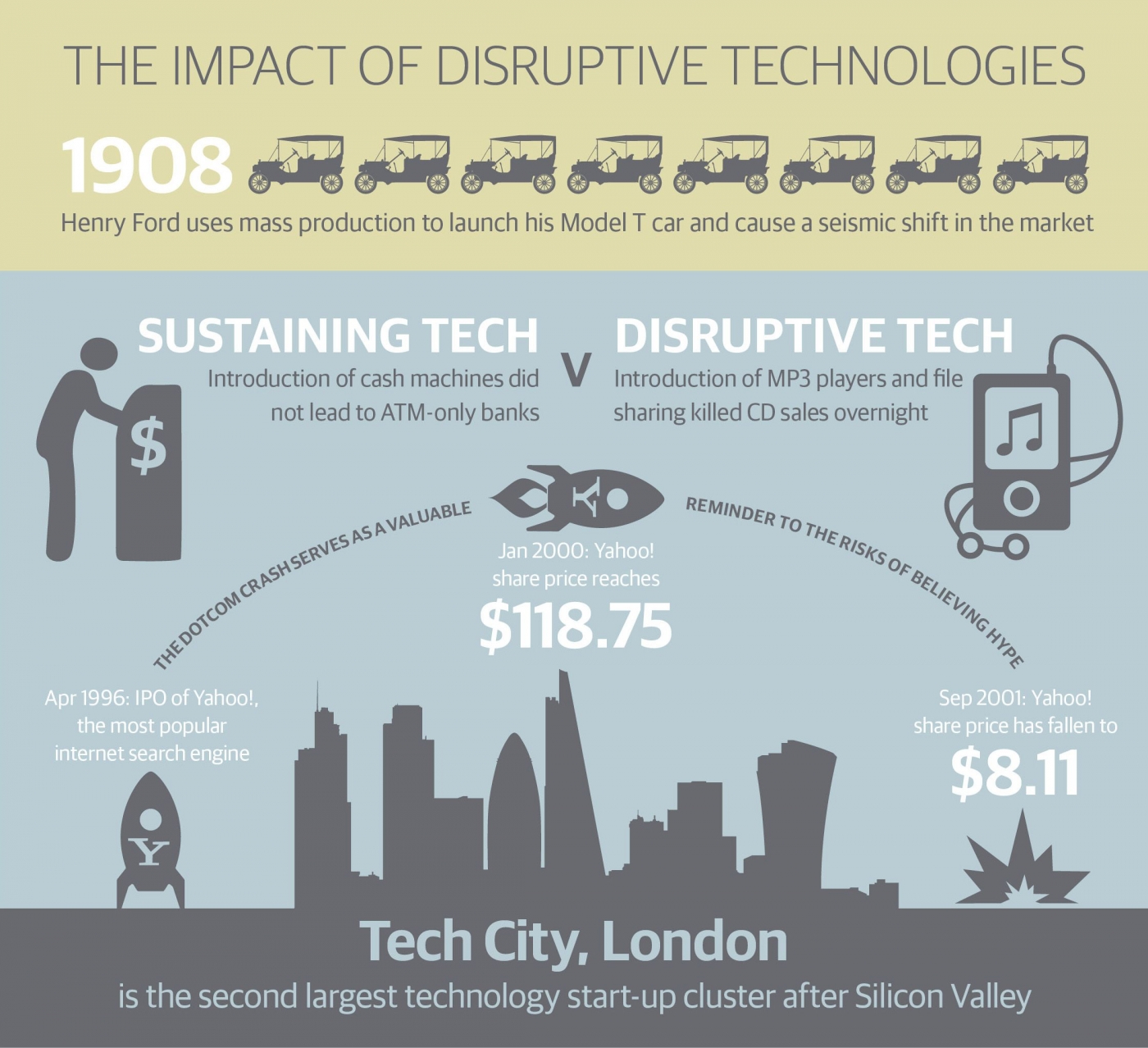 What is disruptive technology?

In this report we have focused on the investment impact of ‘disruptive technology’, rather than make airy futurology-style projections. The term — used interchangeably with disruptive innovation — was first coined back in 1995 by Harvard Business School professors Clayton M Christensen and Joseph Bower. It applies not so much to the initial invention as to the point at which it is widely adopted and changes the market.

The invention of the motor car was not disruptive, for example, because early models were luxury items that barely affected the market for horse-drawn vehicles. It took Henry Ford’s innovative use of mass production and the launch of his affordable Model T in 1908 to cause a seismic shift in the market. Affordability is a key driver in the widespread adoption of new technology.

While innovation is a facet of such disruption, they’re not the same thing. Market leaders can innovate and introduce new technology, but the existing model survives. Professor Christensen subsequently described such innovation as ‘sustaining’ — this can be evolutionary or revolutionary, but the market survives and participants aren’t radically affected. For example, while the introduction of cash machines (ATMs) meant we no longer had to go inside a branch to withdraw money, instantly altering how a bank could interact with its customers, it didn’t lead to the instant emergence of new ATM-only banks.

Instead, we have focused on markets and sectors where the status quo could change radically. As an example, internet file sharing and the emergence of MP3 players, such as Apple’s iPod, killed CD sales almost overnight, causing specialist retailers to close and significant disruption to the music industry.

Without fixating on the current academic discourse, there are several key points about disruptive technologies:

Technology is fascinating, but experience shows it can be a sure-fire way to destroy wealth — many an investor has rued the day they listened to a persuasive analyst talk about a fascinating new innovation. You may be right about the potential of a particular technology (although many do not work out as predicted and are quickly superseded by even better — or cheaper — technology), but you also need to identify how it will be adopted and which companies will profit.

The dotcom crash of 2000 serves as an enduring reminder of the risks of believing the hype without appreciating how to extract value from the business model. From 1997, analysts and investors became increasingly credulous about the impact that the internet would have and how companies might make money from it. Many of these companies were start-ups and years from making profits; in some cases, they didn’t yet have any revenues.

The ability to value a company properly was superseded by the ability to imagine a future in which a company used technology to create a new market or displace existing providers. Yet, when the stock market fell, many of these start-ups went bust as their capital was used up in development or through costly advertising campaigns — that is to say, by normal costs of doing business.

While companies from the dotcom boom and bust era show the problem of ‘buying the story’, they present investors with a challenge. Some of the companies from that period have gone on to change how we live and to disrupt the market radically, whereas other apparent winners have in turn been overtaken by their competition.

Amazon was one of the early IPOs, coming to market in May 1997 — it survived both the boom and bust and has since revolutionised retailing globally. Yahoo! came to the market in April 1996 and quickly became the most popular internet search engine. Its share price skyrocketed, closing at $118.75 in January 2000; in September 2001, after the bubble had burst, it fell to $8.11. Subsequently, Google (whose IPO was delayed until 2004) has gone on to usurp Yahoo! and more or less drive it out of business.

As with the dotcom boom, there is so much hype about developments like the ‘internet of things’ and big data that it can be difficult to identify if, when and how they will actually happen, and how best to invest in their potential. As Peter Berezin (Senior Vice President, Global Investment Strategy at BCA Research) said at our 2014 conference, the challenge for investors is that technological shifts may not be obvious for 20 or 30 years and often depend on marketing and adaption to reach a critical tipping point. We need to be aware of this in devising an investment strategy.

Notwithstanding these challenges, the opportunity cost of not investing in technology could be huge. But is it better to invest directly in smaller technology companies by trying to spot the next Amazon or Google that is truly transformative and can profit from its innovation? Or do technology funds, managed by specialists, offer diversification against the inevitable business failures in such a high-risk area? History is littered with companies that went bust before their technology reached critical mass. Alongside valuation, commercial viability, barriers to entry and market penetration are all key considerations for investors.

The current tech giants could be the answer. This may seem surprising given their exponential growth to date, but companies such as Google and Amazon are using the huge cash flow from their current businesses to buy up smaller companies to augment their offering (and, arguably, to neuter the threat from rival technologies).

Alternatively, the forthcoming developments could be so far-reaching that companies in every sector will benefit from falling costs as technology ‘commoditises’ the world. The financial benefits may accrue to the consumers rather than the innovators — if business costs fall sharply, the winners may be retailers, insurance or engineering companies, while the technology companies may destroy shareholder value through price wars or other bad financial decisions.

Whichever approach investors take, disruptive technologies could have a disastrous effect on investment portfolios as whole sectors are at risk of obsolescence. Active investing is arguably better suited to this challenge as technologically-vulnerable behemoths can be avoided in favour of smaller ‘new tech’ companies. In simple terms, passive investors run the risk of holding a portfolio of canal operators just as the railway companies are about to take off. While this is not the place to rerun the active vs. passive debate, active portfolios can more easily invest in the leaders of tomorrow.

Technology transcends national and industry boundaries, so as investors we must consider it on a global basis across all sectors. Although governments are generally poor at creativity and innovation, they can influence how technology is developed and adopted, with important implications for intelligence, policy and taxation. However, implementing regulatory or governance structures that serve all stakeholders equally may be a challenge for national governments.

The UK is well positioned to benefit from technological changes. Tech City in London is now the second-largest technology start-up cluster in the world after California’s Silicon Valley. While we have an excellent history of innovation, we have historically lagged the US in exploiting the commercial benefits. This is changing, however, and many UK businesses are now world leaders in the digital economy, enjoying strong intellectual property rights and a dynamic marketing culture.

Despite our national tendency to play down success, the UK is a major player in the technological revolution. Significant changes are coming, but we should embrace the future with optimism.

Figure 1: Six ages of the internet
Hewlett-Packard describes the development of the internet in terms of progressive stages. This model suggests the "sensor" stage is the next development but it is likely to take a few years to achieve its true potential and global reach.

In some ways, the IT revolution is following clear stages. The invention of the internet (first age) and world wide web (second age) started the process, making possible applications such as email, but the development of search engines such as Yahoo! and Google as well as the mobile internet and devices such as smart phones and tablets (third age) enabled the real transformation in how we apply this technology. Crucially, each stage had to occur before the next was possible.

The cloud (fourth age), which enables the remote storage of data and software, is already with us, but the benefits are still to be maximised, particularly by big companies. Small- and medium-sized enterprises have been attracted by how cost-effective it can be to use the cloud, but many larger companies, which may be more worried about security or are otherwise less nimble, are still to exploit its potential.

Next the so-called ‘internet of things’ (fifth age), based on the widespread application of wireless sensors, will have a substantial impact on our lives and the economy. Smart technology will be embedded in our homes, offices, cars and urban environment, helping us to manage our lives more efficiently. From monitoring traffic flow, to measuring the moisture in a field of crops, to tracking the flow of water through utility pipes, the internet of things will allow consumers, businesses and governments to cut costs.

The world’s largest technology companies are driving this transformation. From a global network of trillions of sensors to measure, study and communicate, the much-hyped concept of ‘big data’ will become a reality.

Beyond this, perhaps 10 years away, robotic devices will use this data to make decisions and act, just as humans do today (sixth age) — this is known as actuation.