Home › Insight › Review of the week: All eyes on the money printers

Review of the week: All eyes on the money printers

These days, when markets get a bit rocky investors shuffle their feet and hint to central bankers that firing up the money presses would be a great idea. Our chief investment officer Julian Chillingworth sets the scene for a potentially blockbuster week of monetary policy. 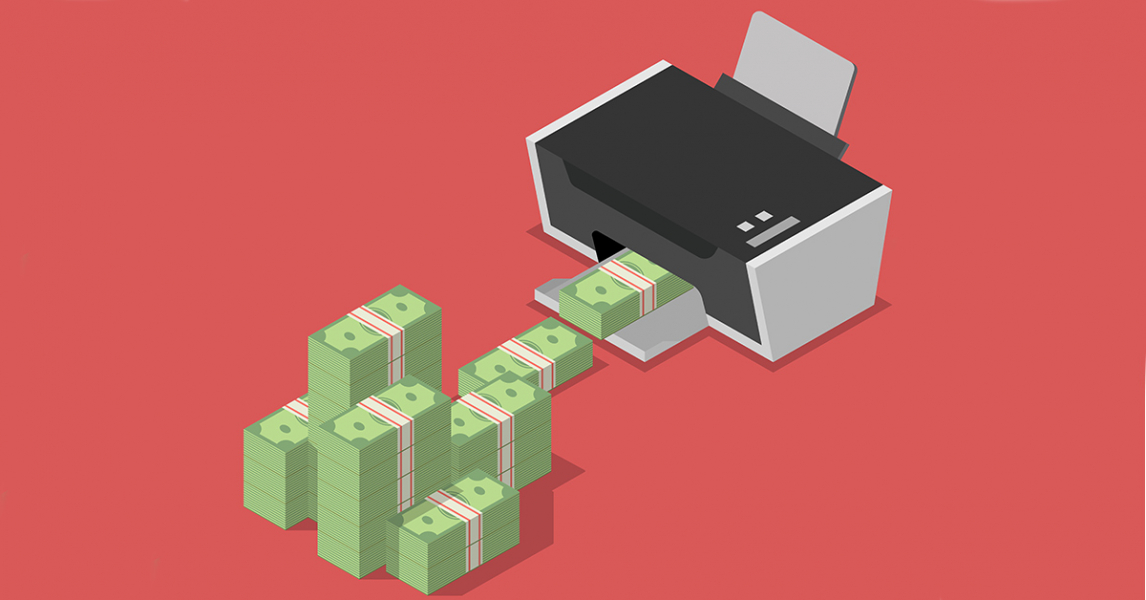 It’s a monetary policy omnibus this week. The Bank of Japan, US Federal Reserve and Bank of England are all holding policy meetings. These technocratic sit-downs follow a rocky month for global stocks, led by concerns of slowing GDP growth, escalating trade threats and tolling alarm bells in bond markets.

The US has ratcheted up pressure on China, pushing on with a planned $300 billion of extra tariffs at the end of June if no progress is made at the G-20 meeting. If the plan goes ahead, American retailers will have a difficult decision to make. So many products, from smartphones to clothing, furniture and chemicals, come from China.  Retailers would have to either absorb this spike in the cost of imports or pass it on to their customers. Both of these options are terrible because Amazon’s rise to prominence has made competition razor sharp and slashed the profitability of shops. If a shop raises its prices and the others don’t, its sales will bleed away. If it holds the line on prices, it could lead to losses and bankruptcy.

Earlier this month, the World Bank reduced its estimate of 2019 global growth from 2.9% to 2.6%, with emerging nations and the eurozone likely to be hardest hit by the slowdown. Despite the increasing trade attacks on China, the country’s growth forecast has actually held up well in the most recent appraisal – lower, at 6.2%, but stable. Year-on-year, China’s growth is expected to decelerate from 6.6% last year to 6.2% this year. Brent Crude prices have slumped, from around $72.50 a barrel in April and May to roughly $62 today. When growth is expected to slow, oil prices typically fall precipitously because virtually everything we touch in today’s world includes fossil fuels, whether in the product, its transportation or the daily commute of the people who make or consume it.

Amidst all this, the bond market has tolled an ominous note: the yield of the 10-year US Treasury bond is now significantly lower than the rate of return on a three-month bond. Typically, the bond with a longer life should have a higher rate of return to reward locking in your money for a longer period of time. It also pays you a premium for taking the risk that interest rates move against you: when interest rates rise, the value of bonds fall and the farther in the future that a bond matures the greater the drop. Of course, that works in reverse, too. So if investors expect growth and inflation to fall and central banks to cut interest rates, then the bonds that will benefit most are those with the longest life. Thus, the bond yield curve ‘inverts’ (long-dated bond yields drop below those of shorter-maturity). With only a few false alarms, this inversion tends to presage a recession and a stock market slump. The hard part is knowing how long it will be before this occurs – in the past it has been anywhere from nine months to two years.

And so we come to the central bankers. The US Federal Reserve’s policy meeting culminates with a press conference on Wednesday. Chair Jay Powell is expected to roll out a message that is light on the probability of a rate increase and heavy on the chance of a rate cut in the near future. Prices in the bond market imply this cut could come as early as next month.

The central banks of Japan and the UK are both making announcements on Thursday. Again, little action is expected, but investors will be highly attuned to the language used. Rightly or wrongly, markets are wanting to see nothing but support from them, and no stray chatter about potential tightening.

On the Continent, EU members are wrangling over who will take over the top jobs at both the European Central Bank (ECB) and the European Commission later this year. Unfortunately, it seems like political considerations rather than merit are at the top of the selection criteria. The ECB is an especially important and difficult job, in our opinion. Having a patsy at its head could have terrible consequences. Current President Mario Draghi has done an admirable job keeping the dual-speed economic bloc on the road. He has staved off deflation, encouraged as much growth as possible and jostled the banks into cleaning up their tattered loan books. All this while trying to prevent Germany’s economy overheating and the smaller, struggling economies from slipping into a great-depression-like spiral. There is but one exception to this record: Greece, which has endured a terrible decade of pain. But for a shrewd man at the helm during and after the European debt crises, this fate could have been widespread across the Continent. We hope reason will reign among EU politicians, and that they pick Finnish candidate Erkki Liikanen, rather than Bundesbank President Jens Weidmann. Mr Weidmann is likely to run the ECB as an extension of the German treasury, with tight monetary policy to suit his home team. This enforced ‘fiscal rectitude’ among the member states would be a mistake.

If the ECB’s next head is picked solely due to the relative clout of his native nation, then it bodes ill for the European project. It would also be terrible news for the poorer, smaller countries of the EU who will have to bear the pain. The Greek tragedy may yet be writ large in Europe.

The remaining contenders to replace Theresa May as Prime Minister and Conservative Party leader took to Channel 4 for a debate that looked like a game show – and felt as inconsequential. The clear favourite, Boris Johnson, refused to participate and the decision has done him no harm in the polls so far.

His decision makes complete sense, a sad indictment of political discourse in our age. If you have but one principle, the seeking of power for its own sake, then you should have no qualms about avoiding a situation that gives you only downside and virtually no upside. This Machiavellian strategy is as much our fault, as a nation, than it is Mr Johnson’s fault for exploiting it. If a man who wishes to represent a country refuses to speak freely to its people in an open forum, those people should (1) be suspicious and (2) be punishing that decision by supporting candidates who do take the electorate seriously. As it is, we’re not. In fact, this isn’t a British phenomenon – it’s not even one confined solely to our global generation. For decades, politicians have found that ‘straight-talking’ is good, but honesty is bad. People don’t care about specifics and they don’t want to hear reality.

Richard Nixon’s campaign staff pioneered the strategy in the 1968 American presidential race (Joe McGinniss wrote the playbook in The Selling of the President): the less of substance a politician says, the less chance of alienating any section of society and therefore the more chance they stand of winning. Today’s politicians have perfected it: don’t say anything at all. Mr Johnson says he plans to appear in tomorrow night’s BBC debate – after the second round of voting that will cull any candidate who receives fewer than 32 MP votes. Depending how many candidates remain, subsequent votes will be held among Conservative MPs with each one cutting the last-placed candidate until two remain. At that point the pair will canvass for votes among Conservative Party members.

Mr Johnson appears likely to ride smoothly into No.10 in a submarine, popping up only for well-timed soundbites.