Home › Insight › Rising to the challenge

Rising to the challenge

Scientists estimate that if we are to feed the world’s growing population we will need 70% more food by 2050. With a mere 10% of the Earth’s surface suitable for cultivation and soil degradation putting much of that under threat, many suggest the answer is vertical farming. It seems the stuff of science-fiction. Can it work? 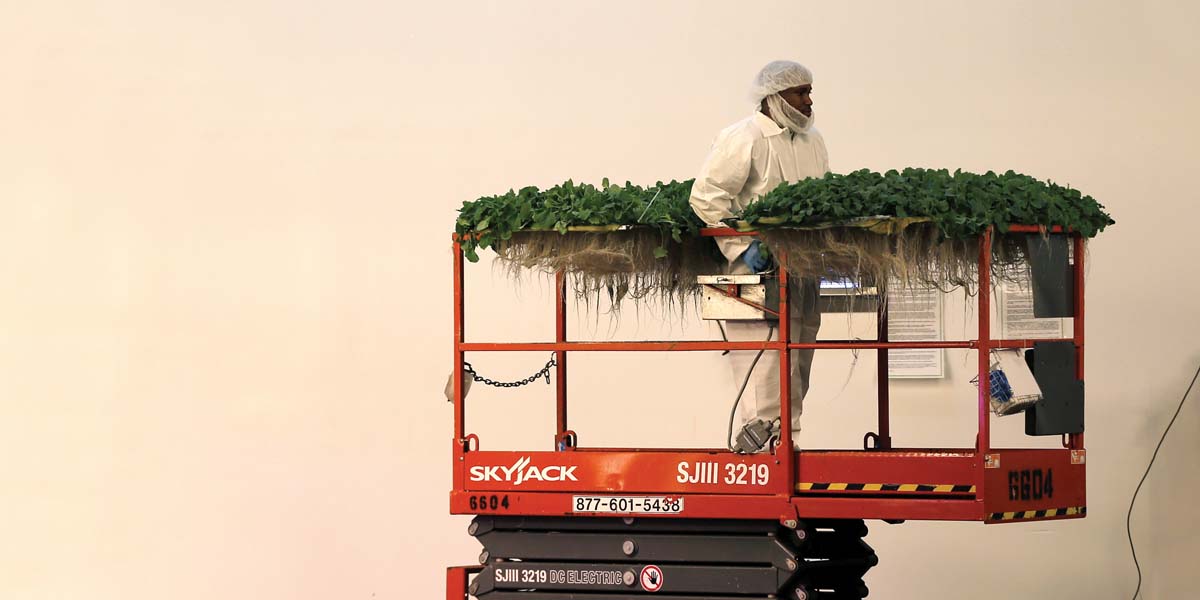 Isaac Asimov believed that the job of science-fiction writers was to “foresee the inevitable”. He claimed that the problems and catastrophes that he and his fellow visionaries presaged were almost bound to happen. What they could not predict, he ruefully added, were the solutions.

Maybe the most obvious illustration of this argument today is I Am Legend. Published in 1954, it depicted the bleak aftermath of a global pandemic. While the basic premise has manifest resonance now, the hero’s running battle with hordes of mutant vampires offers little in the way of applicable wisdom or practical responses.

Similarly, a number of classics in the dystopian sci-fi canon prophesied but failed to resolve the interrelated issues of overpopulation and resource scarcity. One, 1966’s Make Room, Make Room!, was turned into a cult movie, Soylent Green, whose infamous payoff revealed an enterprising mega-corporation’s plot to maintain food supplies by secretly transforming human remains into ready meals.

Thankfully, science-fact has repeatedly shown itself capable of taking up science-fiction’s slack. Vertical farming, an idea that is already revolutionising agriculture, serves as a compelling example.

Its roots lie in crisis. It was inspired by a need to tackle several increasingly pressing trends closely linked with food security — foremost among them population growth, industrial development, urbanisation, loss of arable land and climate change.

Proponents contend that all these factors demand a significant shift in our relationship with food. Traditional methods of production are no longer sustainable, they say, both because there is insufficient useable acreage and because such that is available is too distant from where the vast majority of people live.

As a result, farming is not quite being turned on its head: rather, it is being rotated through 90º.

“It’s vertical because you’re trying to grow more crops on a smaller land area, and this usually means going upwards into buildings,” says Dr Erik Murchie, an assistant professor of crop science at the University of Nottingham. “The beauty is that you can go as high as you want — if you have a system that works efficiently.”

Microbiologist and ecologist Dickson Despommier is routinely acknowledged as the father of vertical farming. He and his research team at Columbia University, New York, originally set about popularising the concept just over 20 years ago.

Since then their thinking has been put into practice in a remarkable variety of settings. Today vertical farms can be found in warehouses, shipping containers and abandoned factories; on city-centre rooftops and behind the scenes at Michelin-starred restaurants; and in landscapes as diverse as the arid deserts of the Middle East, the frozen expanses of the South Pole and the teeming conurbations of Japan.

Ocado has made a multi-million-pound commitment to vertical farming. Its CEO, Tim Steiner, has said it will enable the company to satisfy “fundamental consumer concerns on freshness and sustainability” and that it could soon be possible for purchases to be “delivered to a customer’s kitchen within an hour of being picked”.

The Future of Food 2040, a study by the National Farmers’ Union, identified vertical farming as a potentially vital component of a radically different agricultural sector that is likely to emerge during the coming decades. It was recently estimated that the market could be worth $7.3 billion by 2025.

So how does it all work? Essentially, vertical farming involves growing produce in multiple stacked layers that are sited indoors. Most systems are aeroponic or hydroponic, and there is rarely any need for soil. Lighting is strictly controlled and often comes courtesy of state-of-the-art LEDs. Temperature, humidity and plant density are thoroughly regulated. Thanks to recycling, water use can be up to 95% less than in conventional farming.

The general aim is to grow more in less space while avoiding the age-old drawbacks and caprices of relying on the once-great outdoors. COVID-19 and lockdown have seemingly only enhanced the appeal of such a philosophy: Infarm, the specialist with which Marks & Spencer has partnered, reported a 222% surge in sales during the second quarter of 2020.

“People want to eat the same food at all times of the year,” said Emmanuel Evita, Infarm’s global communications director, when the M&S deal was announced. “This, combined with lengthy transportation routes and overtaxed soil, takes a heavy toll not just on the environment but on the taste and nutrition of what we eat. Our approach allows us to be climate-independent and grow under any conditions, despite extreme weather or disasters that normally interfere with food production and distribution.”

While an ability to grow crops throughout the year and almost anywhere in the world undoubtedly represents a major advance, vertical farming has not yet been perfected. Above all, its longer-term financial feasibility is still uncertain.

Critics suggest that the cost of constructing, lighting and heating vertical farms could outweigh the benefits that they can bring. In 2018 the Japanese Greenhouse Horticulture Association said that 60% of the country’s projects were unprofitable.

Energy use is a particular worry. Artificial lighting and climate management can be notably energy-intensive. Andrew Jenkins, a research fellow at the School of Natural and Built Environment at Queen’s University, Belfast, has warned that this could leave vertical farms in a “grey area” and “a long way from being a sustainable method of agriculture”.

Relatedly, dependency on technology is total. Vertical farms may be immune to droughts, floods, cyclones, dust storms and other natural phenomena, but they stand at the mercy of power failures and tech breakdowns. A single day without fully functional systems could devastate an entire crop.

Currently, there are also constraints on what can be grown. Only lightweight produce is suitable, which means that the likes of wheat and maize — which rank among the most important food sources — are too large and heavy to be cultivated.

The hope, of course, is that further innovation will address these concerns. If and when this happens, say vertical farming’s advocates, the route to mass adoption should be clear. The ultimate proof will lie in the viability of scaling up.

Perhaps crucially, one thing that vertical farming very much has in its favour is policymaker enthusiasm. The World Economic Forum has hailed the “numerous advantages” of such an approach, underscoring the impression that this is perceived as an authentic solution.

Science-fiction gave us stories; science-fact has given us storeys. It is not difficult to determine which is likelier to have longer-term relevance. As the fight to stave off the inevitability of overpopulation and resource scarcity continues, we may soon discover if the sky really is the limit.

This article has been taken from 'Rathbones Review Autumn 2020' read the full publication here.