Home › Insight › Trade of the century

Trade of the century

Following the election of Donald Trump as the next President of the United States, investors should take note of the hidden costs of protectionism.

We believe that protectionism — the practice of shielding a country’s industry from foreign competition — and the prospect of a descent into a ‘beggar thy neighbour’ global trade war is one of the biggest risks to investment returns over the next decade, and it’s not getting nearly enough attention. Indeed, politicians are already succumbing: according to the Global Trade Alert initiative, the number of protectionist measures enacted globally in the first four months of 2016 was three times the average number of measures passed in the same period over the last decade.

Free trade has undoubtedly accelerated the broader process of ‘creative destruction’ and the corollary is greater disruption to working lives. If politicians wish to secure the benefits of trade for future generations they would do well to implement policies that soften the disruption, or else the nationalistic demagoguery of maverick, anti-establishment politicians could deliver shock results — to politicians and investors alike.

Taken at face value, protectionism provides a large, easy to quantify gain to a small but visible and vocal number of people. Yet it simultaneously delivers a small, hard to quantify loss for every member of a large and silent majority. The aggregated impacts of those small losses invariably far outweigh the ostensible gains. We highlight the countries most at risk of a protectionist insurgence: the United States and Italy are clear front runners. The consequences of these two economies sliding into popular protectionism would be grave and far reaching – the election of Mr Trump makes this far more likely. 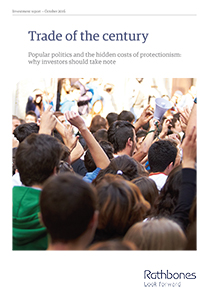 Read more of our insight into the US election

*N.B. This report was first published in October. Given his campaign commitments to impose tariffs on China and Mexico and oppose or scrap free-trade deals, its findings are particularly relevant following Mr Trump’s election victory.