Home › Insight › What we eat and why it matters

What we eat and why it matters

Can we take a bite out of climate change? 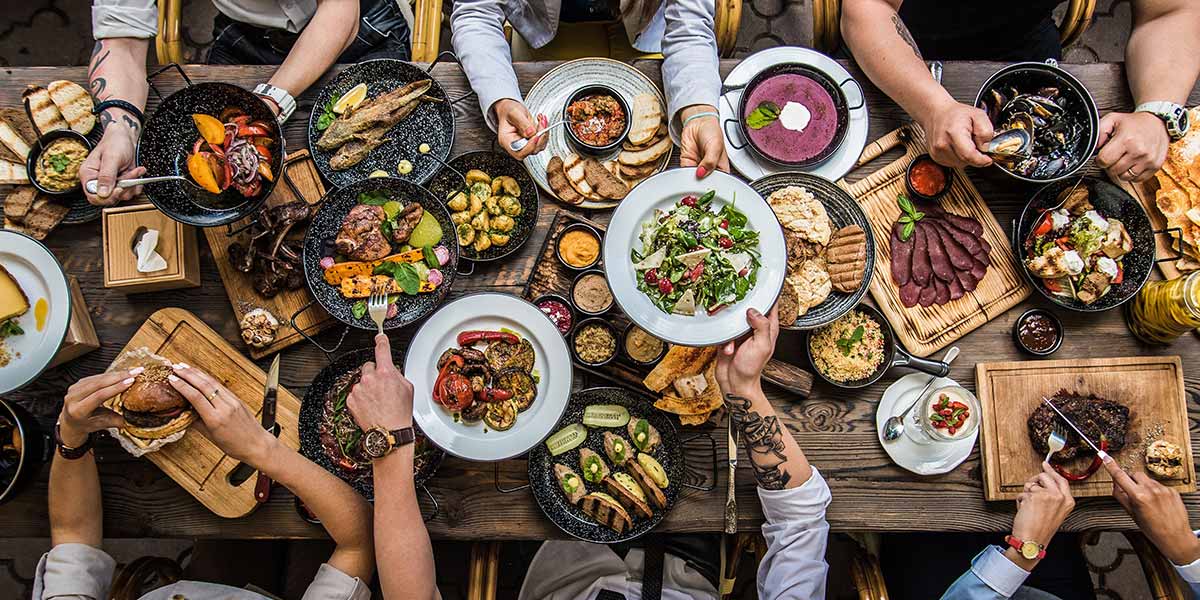 We welcomed clients to the fourth in our Earth Convention series on climate change, in conjunction with 5x15, a leading cultural events organisation. The subject of the discussion was ‘What We Eat and Why it Matters’, and our speakers were Professor Tim Benton, Dr Geeta Sethi, Tristram Stuart and Anthony Warner. The panel was hosted by food campaigner, journalist and crossbench peer, Baroness Rosie Boycott.

Poor diets are the number one cause of mortality around the world. Those diets tend to be rich in calories, ultra-processed and primarily based on starchy crops, palm oil and sugar. 75% of the world’s calories come from wheat, rice and maize plus palm, soya, sugar, barley and potato. That means that all around the world, we are eating different diets, but they are roughly based on the same foods. If we were to eat sustainably, our diet would have more or less the same characteristics as a healthy diet as it would be rich in a diversity of plants and wholegrains. It would crowd out meat and be low in the refined sugars and ultra-processed food. So, a healthy diet is a more sustainable diet; we hit two birds with one stone.

"A kilo of beef uses 75 times more land to produce than a kilo of tofu, it emits 25 times more greenhouse gas on average and it provides far more pollution to air and water from fertiliser use."

Food systems are responsible for between 25%-30% of global greenhouse gas emissions. By food systems, I mean the production, processing, retail, transport, consumption and waste of food and its impact on health and the environment. In rank order, the causes of the emissions are first: land-use conversion, which is chopping down forests to produce new goods. The second is the methane emissions that come from ruminant animals and wet soils, for example, rice growing. The third is the transport, cooking and distribution of food. The fourth is the nitrous oxide emissions that come from fertiliser and manure.

Different foods have different footprints and footprint hierarchy is an important consideration when we make food choices. Beef has the highest footprint, then chicken and then beans. To give a headline figure, a kilo of beef uses 75 times more land to produce than a kilo of tofu, it emits 25 times more greenhouse gas on average and it provides far more pollution to air and water from fertiliser use.

However, when it comes to food choices, we shouldn’t think about footprint alone. There’s an important role for livestock in the food system and if you simply follow the footprint hierarchy, everyone will end up eating chicken rather than beef and we’ll need to grow more grain to feed the chickens. A systemic analysis of the food system shows that mixing arable and livestock creates good nutrient cycling and a diverse landscape which is good for biodiversity. Sustainability isn’t just about greenhouse gases so instead of saying ‘don’t eat beef’, perhaps you should be eating less but better.

For more information, please refer to Tim’s report from Chatham House on Food Systems and Biodiversity Loss which came out this month.

This is the decade to get the transformation of food systems on the right track. The way we are growing and consuming food is bankrupting our planet and making our people unhealthy. This challenge is only set to rise as we are going to need 56% more food by 2050 in order to feed our population of roughly 10 billion. We need a food system which delivers to people and the planet.

"The way we are growing and consuming food is bankrupting our planet and making our people unhealthy."

COVID-19 has put the transformation of food systems high on policymakers’ list. It’s also amplified the weaknesses and the hidden costs of the food system, and the role healthy diets play in improving resilience. A recent report, Growing Better, found that the hidden costs of today’s food system is $12 trillion, and these costs are mostly associated with people; the food we eat is making us sick.

The pandemic has presented an opportunity for us to get political traction on the food agenda. It’s putting public finances under stress and pushing finance ministers to really take a hard look at the effectiveness of the public support programme. The links between diet, our immune systems, the prevalence of pre-existing conditions and vulnerability to COVID might cause consumers to think more actively about the importance of healthy diets. We just need to define a finance structure to change the way we are growing food, consuming food, and we may reach some of the goals we’re after.

Food waste simply wasn’t on the political agenda when I started campaigning about it 10 years ago. Big companies swept it under the carpet and public awareness was low, but the world has changed dramatically since then. Today, you can’t be a big company in food without having a food waste strategy. The British public are at the very forefront of this movement. We have reduced our food waste by one third per capita since records began, which is a significant mass behaviour change.

I think we can continue to turn things around quickly and we already know how to do far more in a way that can replenish rather than deplete, create habitat rather than destroy it. Two factors are needed to further support our efforts, firstly, public policy change. $700bn that is spent every year on supporting agriculture, of which only 1% is spent on ecological farming. That needs to change. Plants have been doing a great job of sucking carbon out of the atmosphere and putting it into soil for billions of years. We are doing more to build soils and fertility and create a better system. Ecological farming actually enriches wildlife and landscapes, if it’s done sensitively. The second change needed is individual behaviour - we can buy our way out of the problem by choosing ecological, harmonious foods.

"We have reduced our food waste by one third per capita since records began, which is a significant mass behaviour change."

Everyone is yearning to come together around a meal again, which brings me to my favourite word: companion. Com is the Latin for ‘with’ and pan refers to the Latin for ‘bread’. A companion is literally someone you break bread with. Sharing food to build friendship is a universal human behaviour practised by every society all over the world. Reducing food waste is one of the top ways we can cut back carbon dioxide emissions but it’s also a great way of building friendships, and it’s this way of looking at food waste that appeals to me. Think of all those friends we would make if we shared our food rather than throwing away 1.3 billion tonnes of it every year.

I like this almost hedonistic approach to the environmental campaign, where we squeeze every last drop of deliciousness and friendship out of every meal. Let’s use companionship to bring people together around the vision that we can reform our food system in a way that replenishes our lives and nourishes us but is also in good companionship with our fellow humans and the earth. That’s my manifesto.

Anthony Warner, chef and author of Ending Hunger: The Quest to Feed the World Without Destroying It

The environmental impact of meat is huge. It uses 83% of the world’s farmland, and 50%-60% of all greenhouse gases raised through agriculture are produced because of livestock production. But it only produces 18% of our calories and about 37% of our protein, so it’s incredibly inefficient. Cows particularly use a lot of energy through ‘mooing, pooing and chewing’. As Tim mentioned, a kilo of beef protein uses 150 or so times the greenhouse gases, or 100 times the land compared to a kilo of soya.

In the UK, probably 60%-70% of all the cereal grain we grow gets fed to animals and around the world, a billion tonnes of human-edible food gets fed to livestock, which would be enough to feed about 3.5 billion people. In a world where we have 800 million people who just don’t have enough food to eat, that just doesn’t seem like a fair system.

We’re already eating too much meat, but consumption is set to increase by 3.5%-4% every year which means it will have almost doubled by 2050. The amount of meat we’re eating and the impact of that on the food system is incomprehensible. But there are two attitudes towards solving this issue. Very strong vegan advocates take one side, and on the other side there are a lot of people saying: ‘meat is fine, stop picking on it, we should stop flying.’ I think both sides are wrong. There’s a case for meat within our food system that isn’t often highlighted.

Two billion people around the world rely on animal agriculture for their livelihood and if everyone stops eating meat, those people will have to find another way to make a living. Often those people are living in marginal areas where animal agriculture is the only viable form of food production, so if you tell them to not eat meat they will probably starve.

"We’re already eating too much meat, but consumption is set to increase by 3.5%-4% every year which means it will have almost doubled by 2050."

In the UK, livestock and arable farming are very separate, but most of the world’s food is produced on smaller mixed farms and there are a lot of valuable synergies between arable and animal agriculture. For example, animals can pull ploughs, control weeds, transport goods around, consume crop residues, provide fertilisers, provide financial security and consume food waste. Animal produce is also important for nutrition. In a country like ours, we can be pretty healthy on a vegan diet as we have access to nutrition-fortified food and supplements but in a lot of parts of the world, animal products make a huge difference to nutrition.

We often contrast the worst animals produced on the worst land with the best plants produced on the best land, of which beef and soya make good examples, as we have already seen. But when it comes to land use and protein per hectare some plant foods are terrible, such as celery, tomatoes and cabbage. But we don’t criticise these because we want everyone to eat more fruit and veg.

I think we should think about meat in a different way. It is quite an inefficient way to produce protein and nutrients, but it also provides valuable nutrition and gives us pleasure. It has a lot of cultural importance and a unique flavour that’s hard to replicate. The problems only occur when we massively overconsume it and see it as a staple we have to have with every meal. The problem is, we eat far too much of it. We need to consume it far less and value it more. Instead of arguing about burps and farts and emissions, we should find ways to make that behaviour change happen.

Read our Planet Paper 4: Feeding the planet which discusses overhauling the food system as we work towards a more sustainable future for our planet.

You can watch the four talks from the Earth Convention and register for our next event: Natural capital, biodiversity and oceans on 10 April.