The Dalemain Marmalade Festival is the culmination of the World’s Original Marmalade Awards, with winners of the hotly contested homemade marmalade categories announced and the ‘Best in Show’ awarded. 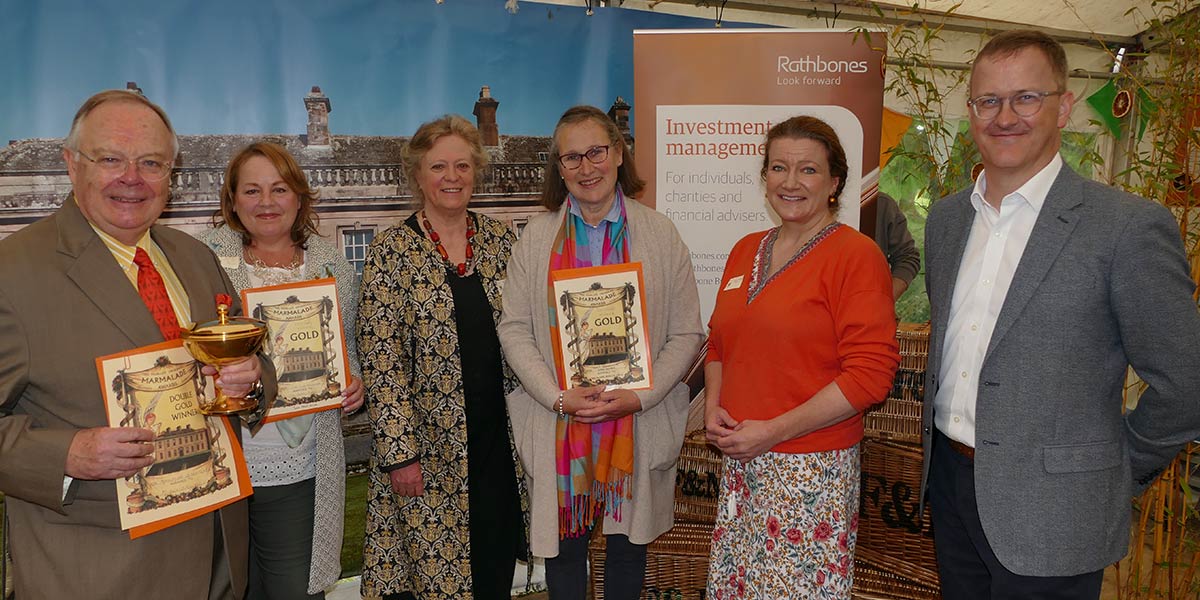 “Rathbones is continuing its support and inspired by the success of the First Timer category, is also the sponsor of the new ‘Next Generation’ category in which we have seen so many lovely stories coming through about generations and family connections.”

The 2022 Best in Show was won by Mike Ranson from Newcastle, with his Seville orange marmalade with cider and calvados.

Over 3,000 pots of marmalade were entered into the awards, with the homemade categories growing as people who took to making marmalade under lockdown have been inspired to do more.

The Best in Show award was selected from the fifteen homemade category winners. The honour was awarded to Mike Ranson who won the ‘Man Made Marmalade’ section with his Seville orange marmalade with cider and calvados.

Mike was presented with the Gilt Cup by Laurence Olins, master of the Worshipful Company of Fruiterers, who are patrons of the Marmalade Awards.

Tradition dictates that the winning marmalade is commercially produced as a ’limited edition’ for a year, with a proportion of sales going to charity. Mike’s marmalade will now be on sale in Fortnum & Mason and the Dalemain Tearoom in Cumbria and their online store for the next twelve months. The charitable donations will go to Dalemain’s nominated charity - Hospice at Home Carlisle and North Lakeland and Mike’s nominated charity – the Motor Neurone Disease Association.

Last year’s winner Flora Rider was the youngest ever winner at nine year’s old. She won the children’s category and Best in Show and attended the festival to present a cheque to Hospice at Home £9,800 helping bring the total donated from festivals to over £270,000. Flora will also be donating a cheque to her local hospice on the Isle of Wight for £1,200 from money raised in selling her marmalade.

Founder of the awards Jane Hasell-McCosh said “We are indebted to our main sponsors for their continued support. Fortnum & Mason are our long-standing sponsors and sell an enormous range of marmalade at their Piccadilly store in London.  By their support they enable some of the best marmalades in the world to be sold and raise money for charity and their jar exchange, (where people can drop off their entries at the store, and receive a jar of their marmalade) has been more popular than ever.

“The Homemade entries are up 10% across all categories but the biggest growth has been in the ‘First Timers’ category which was created by Rathbones who joined us as a headline sponsor last year. This category saw 50% growth and we were delighted to see some of Rathbones staff making marmalade for the first time too.

“Rathbones is continuing its support and inspired by the success of the First Timer category, is also the sponsor of the new ‘Next Generation’ category in which we have seen so many lovely stories coming through about generations and family connections.”

Richard Dawson, regional director of Rathbones’ Kendal office said “Supporting the Marmalade Awards is something that our offices right across the country embraced, from taking part to becoming collection points for homemade marmalade makers across the UK and I’m delighted to see the First Timer category achieve such growth in its first year.

Rathbones has been trusted for generations to manage and preserve clients’ wealth and, as one of the UK’s leading investment managers for charities, we felt The World’s Original Marmalade Awards were a golden opportunity to support a great British tradition that also raises so much money for charity.”

All Double Gold winners from the artisan and amateur competition are now available to purchase at Dalemain and Fortnum & Mason.

Nowhere in the world do so many different marmalades come together. Jars from Norfolk stand beside jars from Zambia, a traditional Seville orange marmalade is next to an orange grapefruit, guava and Cosata marmalade.

Summing up the festival, Jane Hasell-McCosh said “Since the awards began 17 years ago, our aim has always been to champion the best of marmalade making, inspiring people to take up this great British tradition and handing on recipes and methods to the next generation. The quality of this year’s entries has been outstanding, and we are seeing a lot of new flavour combinations coming through.

“We have loved reading the stories attached to the Rathbones Next Generation category and are heartened to see more homemade entries than ever, something that’s very encouraging for next year which will be our 18th anniversary.”

Described as a ‘National Treasure’ – the Marmalade Awards celebrate their coming of age in 2023 – when they launch their 18th awards in January and the Marmalade Festival on Saturday 22 April at Dalemain in the Lake District.

Find out more about the Awards here.