The turmoil of the ‘mini-budget’ seems a distant memory, but big challenges still lie ahead. 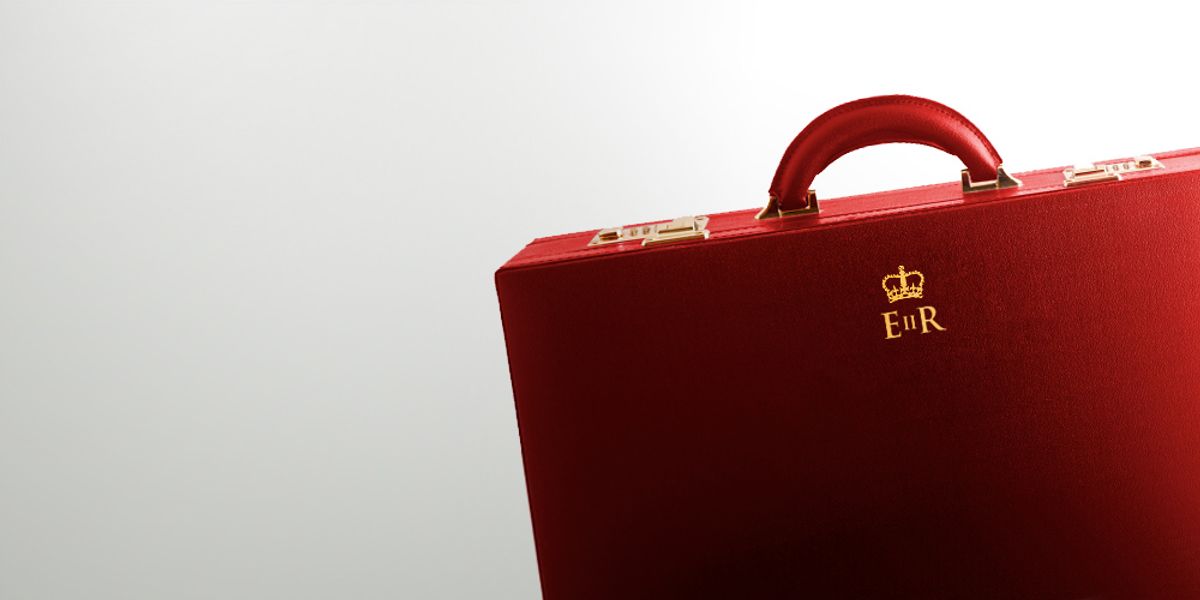 "The crucial point is the market turmoil that greeted the mini-budget is already a distant memory. Sterling remains much stronger than it was before that episode and gilt yields are back to where they were before Kwarteng approached the despatch box."

In contrast to the aborted tax cuts of the last fiscal set piece, which would have been the largest in nearly half a century, Chancellor Jeremy Hunt yesterday announced belt-tightening on a similar scale to the aftermath of the global financial crisis. Hunt’s Autumn Statement cemented the total about-turn in fiscal policy since his predecessor Kwasi Kwarteng’s ill-fated mini-budget just eight weeks ago.

We wouldn’t read too much into the small dip in sterling and slight rise in UK government bond yields in the wake of the statement. With Hunt signalling his intentions weeks ago, and almost all the key announcements widely trailed in the media beforehand, the bulk of the market reaction happened in advance. The crucial point is the market turmoil that greeted the mini-budget is already a distant memory. Sterling remains much stronger than it was before that episode and gilt yields are back to where they were before Kwarteng approached the despatch box.

Investors took fright at the mini-budget because the UK was preparing to go down a completely different policy path to other major economies by injecting extra demand into an economy already struggling with high inflation. Side-lining the independent fiscal watchdog, the Office for Budget Responsibility (OBR), only exacerbated concerns about feasibility and sustainability. Hunt’s new plan has largely assuaged these fears.

Even so, the economic backdrop remains extremely difficult. The UK has entered recession this quarter, according to the OBR, and inflation is likely to stay well above the Bank of England’s (BoE) 2% target throughout next year. We’ve avoided a clear, unforced policy error, but the fundamentals remain very tough.

Belt-tightening, but not today

One particularly striking element of the Chancellor’s plans is the timing. The planned fiscal squeeze happens after 2024, rather than immediately. That’s the effect of freezing tax thresholds for longer rather than raising tax rates, and of waiting to impose spending restraint (the government is largely sticking to existing departmental spending plans for the next two years).

There may be an element of political calculation to this, with implementation of the toughest choices left until after the next election. But there’s economic logic to it too. Both the BoE and the OBR forecast that the UK economy will contract in 2023. And uncertainty remains exceptionally high in the wake of the pandemic as well as the war in Ukraine. In these circumstances, a more gradual approach makes sense – aggressive front-loading would have risked compounding economic pain, causing a deep recession. The fiscal retrenchment can now be fine-tuned or reduced in a few years when the economy is on a firmer footing. It does, however, mean that the BoE alone will shoulder the immediate task of bringing inflation back down. The rise in inflation to 11.1% in October confirms that there’s a lot of work to be done on that front. We think the Bank is still likely to increase interest rates to around 4% next year.

The fiscal consolidation announced was roughly evenly split between tax increases and spending restraint. That’s in contrast to the austerity programme of the 2010s, which heavily prioritised spending cuts. Yet there are still some clear risks to longer-term economic growth around the latest plans to rein in spending.

In particular, reducing investment spending often turns out to be a false economy – spending less on infrastructure today, for example, may reduce future growth and therefore tax revenue. (In economics jargon, investment spending has a significantly higher ‘multiplier effect’ on GDP than either current spending or tax changes.) The OBR estimates that public investment will be around 8% lower than it would otherwise have been at the end of its forecast horizon following the announced changes. That’s despite a shopping list of projects to which the government has given the green light. They include the HS2 to Manchester, Northern Powerhouse Rail, East West Rail, the Sizewell C nuclear power plant, and the continued nationwide broadband and 5G rollout.

"The fiscal consolidation announced was roughly evenly split between tax increases and spending restraint. That’s in contrast to the austerity programme of the 2010s, which heavily prioritised spending cuts."

The NHS will receive roughly a 3% boost in real spending over the coming five years, yet there’s arguably a pressing need for much more spending given the health service is still struggling with the aftermath of extraordinary demands created by the pandemic and chronic understaffing. The number of people waiting more than a year for treatment has surged from close to zero pre-COVID to just over 400,000 now. And those strains in the health service are hurting the economy, with the number of people out of the labour force due to long-term sickness rising by 370,000 since 2019, undoing decades of progress. Back in 2018, the government had hoped to increase NHS spending by 3.4% each year until 2023.

The future of energy support

Alongside all the other fiscal measures, the Chancellor revealed how the government’s support for energy bills will change from April, confirming that it will become less generous. Energy prices are currently capped so that the typical household’s annual bill is around £2,500, but that will rise to £3,000 for the following 12 months, a further 20% increase from an already high level. This means that headline inflation is likely to stay higher for longer in 2023, prolonging the squeeze on households’ real incomes. It’s another reason why inflation isn’t likely to return towards the BoE’s 2% target until 2024.

With the focus primarily on raising taxes and cutting department budgets, the changes announced on 17 November will result in higher levels of tax and an even greater need for financial planning to ensure tax allowances can be utilised while they’re still available.

"With the focus primarily on raising taxes and cutting department budgets, the changes announced on 17 November will result in higher levels of tax and an even greater need for financial planning to ensure tax allowances can be utilised while they’re still available."

The Chancellor prefaced his statement by promising that no headline rates of personal tax would increase, which inevitably meant that income tax thresholds would be relied on to support government spending.

There were no changes to the tax-free personal allowance or the threshold at which people pay the 40% higher rate of income tax. However, both these thresholds have now been frozen until April 2028 – two more years than previously planned.

These changes to income tax thresholds don’t apply to Scotland and Wales as these devolved nations have the powers to set their own rates and thresholds. Changes to capital gains and dividend taxes are set centrally by Westminster for all of the UK.

Although these measures won’t immediately increase the tax burden on individuals, inflation and wage growth will ultimately mean more people will become basic-rate taxpayers and will pull more basic rate taxpayers into the higher rate.

With these changes, it is important to ensure you utilise all the allowances available to you, such as pension allowances and Individual Savings Accounts, especially where you may be close to moving into the next tax bracket.

Continuing with the Chancellor’s measures to raise future taxes, changes to other tax allowances will be staggered over the next two tax years.

Dividends will continue to be taxed at the increased levels of 8.75%, 33.75% and 39.35% for basic, higher and additional rate taxpayers respectively.

Following years of rumours and speculation the Chancellor has now announced a change to the CGT regime.  While avoiding raising the rates themselves, which remain at 10% for basic rate and 20% for higher or additional rate payers, and 18% and 28%, respectively, for capital gains on investment property (e.g. buy to let), there will be changes to the annual CGT exemptions from April 2023. The annual allowance for capital gains will be reduced from £12,300 to £6,000. The exempt amount will then be reduced further from April 2024 to £3,000 each year.

For individuals with large capital gains in their portfolios, this will further restrict the amount that can be withdrawn from unwrapped investments tax free. Therefore, using the current elevated allowances before April is more important than ever.

In line with other allowances being frozen, the IHT nil-rate band and main residence nil-rate band will remain at a maximum of £325,000 and £175,000 per person. These were already frozen until April 2026, but will now remain at the current levels for a further two years to April 2028.

The nil-rate band has now been frozen at its current level since April 2009; the Autumn Statement means it’s been fixed at £325,000 for 19 years. Inflation and increasing asset values mean that more people will now need to consider IHT planning.

To help realise the Chancellor’s ambition that the UK becomes the next “Silicon Valley”, and a hub for innovation, the sunset clause that was due to end income-tax relief for Venture Capital Trusts and the Enterprise Investment Scheme from April 2025 will be extended.

As the government had previously announced, limits for the Seed Enterprise Investment Scheme (SEIS) for both investors and businesses will increase. The annual investor limit will double to £200,000 from April 2023 and companies will be able to raise up to £250,000 under SEIS, up from £150,000.

One of the surviving policy announcements from the mini-budget was the change to SDLT, which increased the level at which the property tax would start to be paid from £125,000 to £250,000. This represents a saving of up to £2,500 for non-first-time buyers, along with similar changes for first-time buyers. The higher SDLT threshold will remain in place, but only until 31 March 2025, rather than indefinitely as was previously the case.

The thresholds and rates for stamp duty equivalents in Scotland and Wales are set by their devolved governments.

A key aim of the Autumn Statement was “protecting the most vulnerable” so it was unsurprising that the triple lock would be maintained for state pensions (protecting their inflation-adjusted value according to three separate measures). This means that pensioners on the full new state pension will receive over £10,000 for the first time, set at £10,600 for those who qualify.

Despite speculation that these might be forthcoming, there was no change to the pensions lifetime allowance or to other pensions legislation including the tax relief.

Read the PDF version of our Autumn Statement 2022 here.