Ukrainian troops and pro-Russian separatists have traded fire and recriminations in the annexed territory of eastern Ukraine, taking the region to the brink of war. 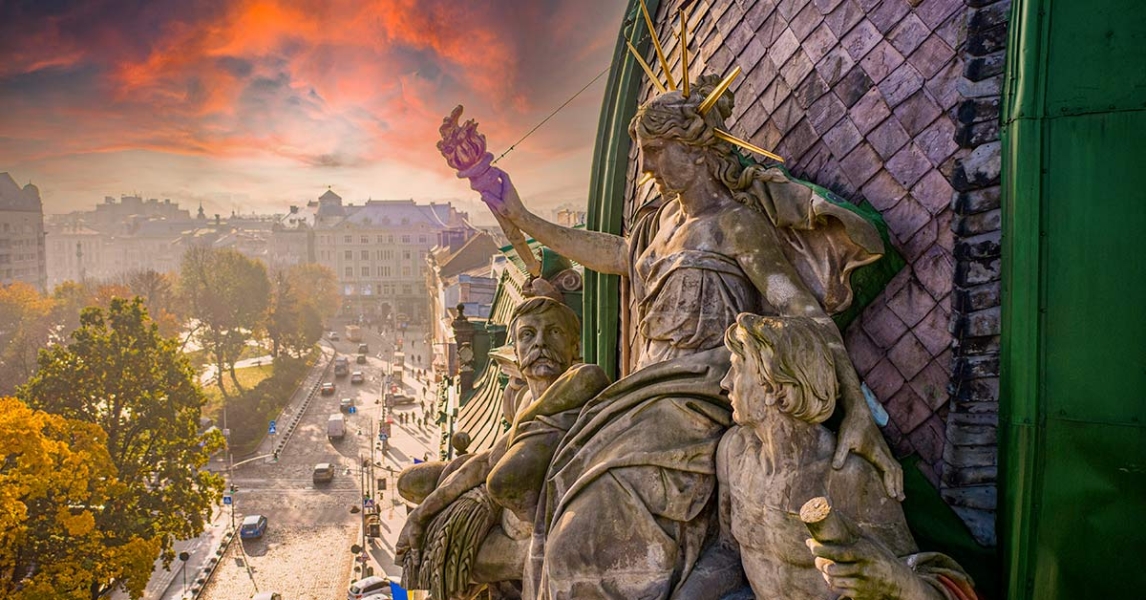 Most geopolitical crises of recent years have hit local markets hard, but at worst done only fleeting damage to global indices. However, there are three events that buck this trend: the 1973 Yom Kippur War/OPEC oil embargo; the 1979 Iranian Revolution; and the 1990 Iraqi invasion of Kuwait. All centre on the price of energy.

A similar oil and gas shock in Eastern Europe as a result of fighting in Ukraine would exacerbate the already sizeable risk that high inflation becomes endemic, which would then require tighter monetary policy to get it under control.

“The reaction to Iraq’s 1990 war in Kuwait, shown in figures 1 and 2, may provide a reasonable first approximation of the potential fallout for global markets.”

It is difficult to gauge exactly what is happening on the ground in Ukraine. There seem to be three broad possibilities:

NATO has some 50,000 troops in Europe, but they are not in Ukraine and will not be deployed there. NATO is an exclusively defensive pact and Ukraine is not a NATO member. Therefore, Western involvement in the conflict will be economic only (both sanctions on Russia and potentially providing materiel for Ukraine’s defence).

The most significant sanctions may include:

Since late last year the threat of conflict and sanctions has been weighing on Russian markets. The effects are similar to what happened during its annexation of Crimea. Russia’s equities have underperformed their emerging market peers by a wide margin recently, despite the strength of oil prices. And the spread on Russia’s sovereign dollar bonds has increased sharply compared to those of economies with similar credit ratings, though not by as much as in 2014. 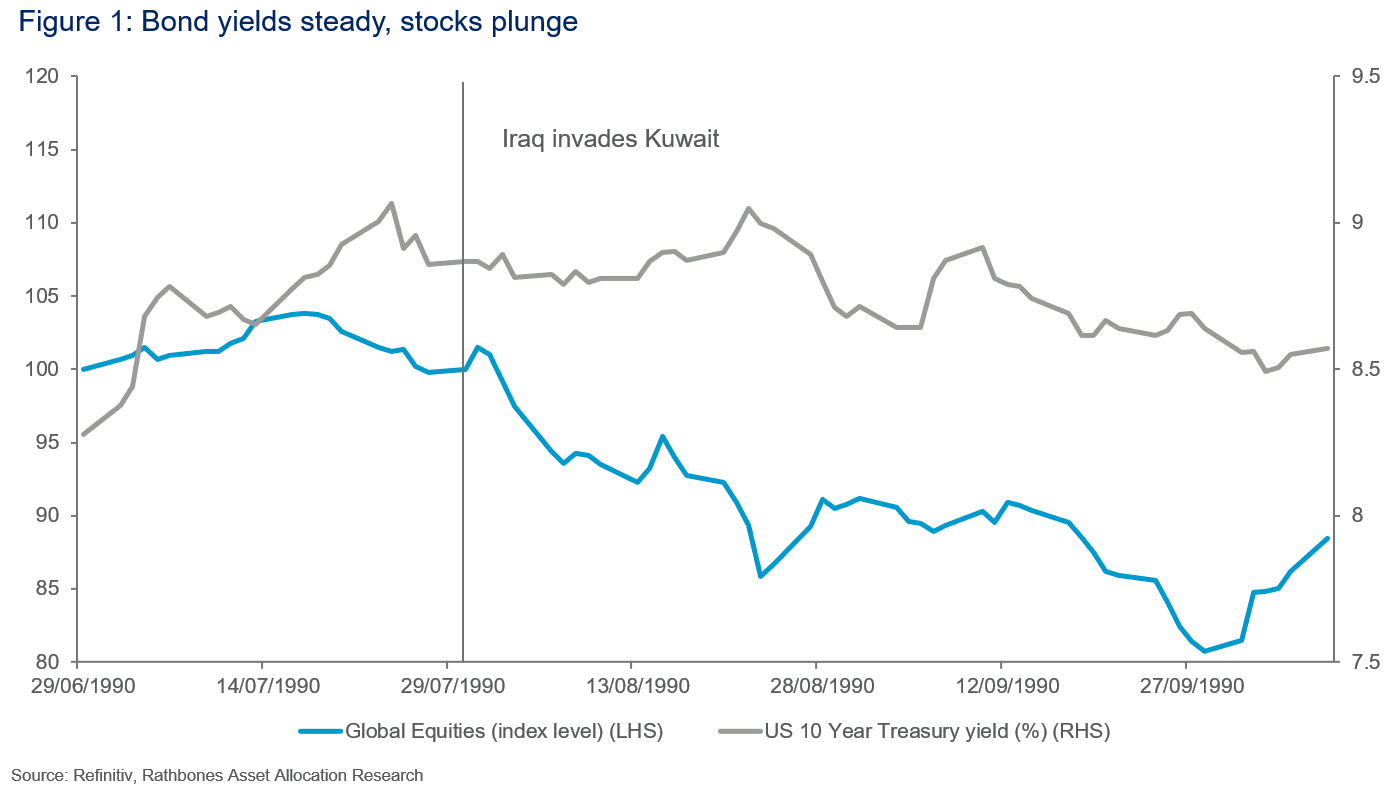 How likely is an energy crisis?

“The EU is so dependent on Russian energy that it seems unlikely to support sanctions strong enough to substantially reduce its exports.”

The EU is so dependent on Russian energy that it seems unlikely to support sanctions strong enough to substantially reduce its exports. The bloc is already struggling with energy-driven inflation and in the short term there’s simply no credible alternative to Russian supply. Energy consultancy Wood Mackenzie estimates that Europe’s gas reserves would be exhausted in six weeks if inflows from Russia were cut off. Its analysis suggests that efforts to import liquified natural gas from elsewhere and to generate more power from other sources would struggle to plug the gap. The result could be blackouts or power rationing across continental Europe. Russia, therefore, has far more leverage than Iran, whose energy exports collapsed following sanctions in the early 2010s. Western Europe’s dependence on Russian gas is probably a key reason why the 2014 sanctions on Russian energy producers were mild and didn’t noticeably affect production.

However, there are other ways in which energy supply could be disrupted. First, conflict in Ukraine could damage the infrastructure used to transport Russian energy to Europe. Around 7% of the EU’s gas imports arrive from Russia via pipelines passing through Ukraine. Second, Russia could deliberately cut off its energy exports. Flows of gas from Russia to the EU have already been somewhat smaller than usual in the past few months. This is one reason why the amount of gas stored in Europe is currently much lower than is normal for the time of year, and why prices remain more than three times higher than a year ago.

It’s extremely hard to quantify the probability of either of these potential outcomes in a meaningful way. Neither is part of our base case for what will happen, but it’s still worth thinking through their possible implications. 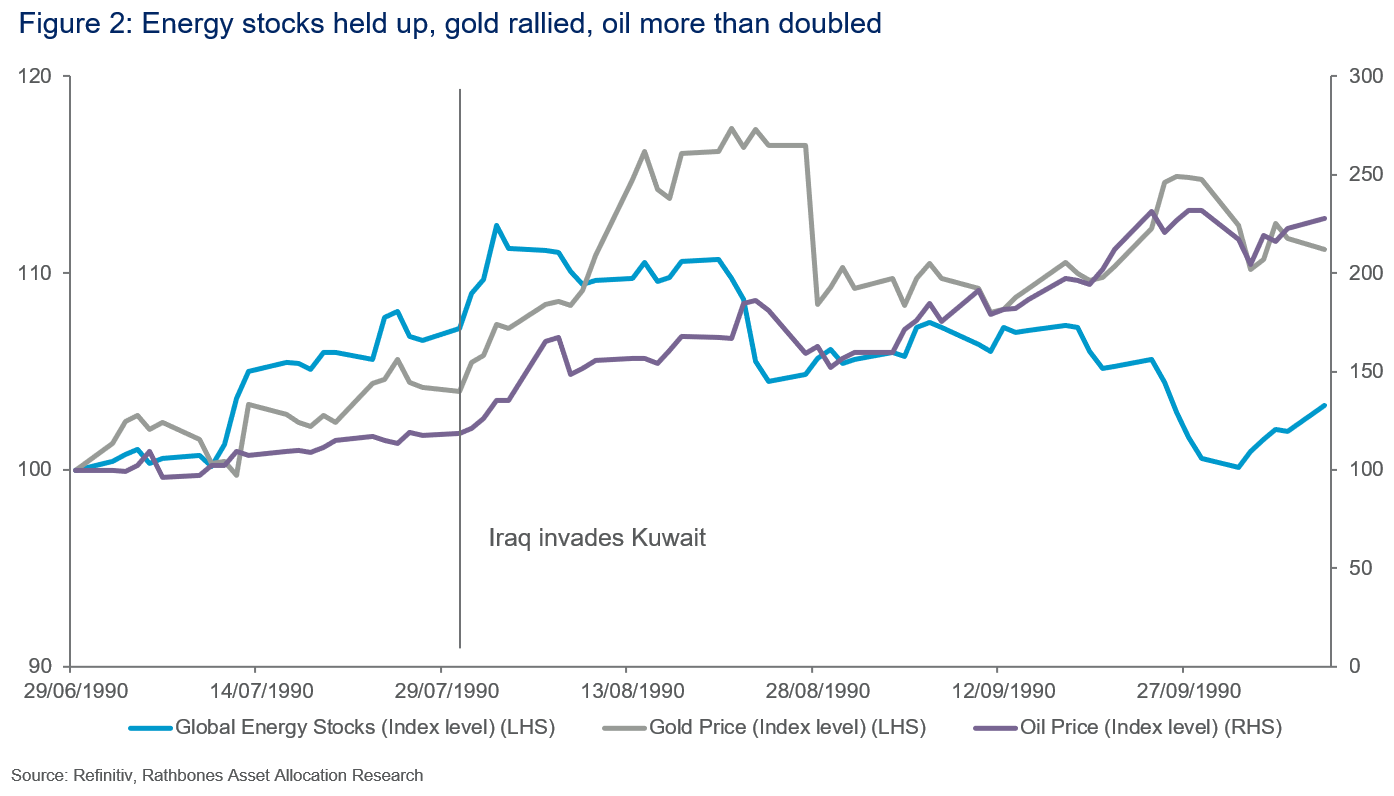 The possible fallout from an energy shock

The direct implications of the conflict on global demand will probably prove small. Neither Russia nor Ukraine is a major source of demand for the rest of the world – Russia accounts for less than 5% of EU exports, and less than 0.5% of US exports.

For the conflict to have a large and lasting impact on markets beyond Russia and Ukraine, it would probably have to result in a significant hit to energy supply (something which did not happen after the annexation of Crimea). In fact, major disruption to global energy supply stands out as the key feature differentiating the few geopolitical crises that have had significant, enduring implications for global markets from the vast majority that have not.

During the OPEC oil embargo and Iranian Revolution, in the 1970s, and the 1990 Gulf War, global oil supply was hit hard, causing prices to more than double in a short space of time. In each case, the surge in energy costs contributed to recessions in the US and elsewhere. In 1973 and in 1990, there were also very large drawdowns in global equity indices (by more than 40% in the former and more than 20% in the latter). And these took a long time to unwind.

Today, Russia accounts for around 12% of global oil output – more than Iran in the late 1970s (around 9%) and Kuwait pre-1990 (about 2%). Nearly half of Russia’s oil exports go to Western Europe. It also accounts for about 17% of global natural gas output. EU countries rely heavily on imported gas to generate power, and 38% of those imports come from Russia.

Absent a big disruption to energy supply, conflict between Russia and Ukraine might have similar effects to the 2014 crisis – a lot more pain in local markets, but ultimately a small and/or short-lived impact on the global economy and wider financial markets. We would also expect energy prices to fall back in such circumstances, and therefore a significant easing of energy-driven inflationary pressure around the world over the course of this year.

But if there is a significant energy supply shock, it would probably hit European economic growth particularly hard. The effects would also feed through to energy prices around the world, contributing to inflation falling back much more slowly and growth weakening elsewhere too. Capital Economics estimates that inflation across advanced economies could be more than 2 percentage points higher than it would be otherwise by the end of the year in these circumstances, for example.

The broader context is highly significant here. Central banks are already concerned about high inflation becoming entrenched, with some talking about faster policy tightening than we have seen for decades. A further inflationary shock would clearly add to the risks of very aggressive rate hikes, compounding the hit to growth.

As for the fallout in global financial markets, the reaction to the 1990 Gulf War, shown in figures 1 and 2, may provide a reasonable first approximation:

Finally, one feature of the current situation that’s different to 1990 is the particular vulnerability of Europe, given its reliance on Russian energy supply. With that in mind, it seems reasonable to think that European equities could suffer more than their US or Asian peers following a Russia-related energy shock, even though there’s been little evidence of this so far.