Home › Insight › Platforms are back, but not stagflation

Platforms are back, but not stagflation

Why we don’t see an economic rerun of the 70s: a preview of the lead article in this quarter's Investment Insights, which is coming soon. 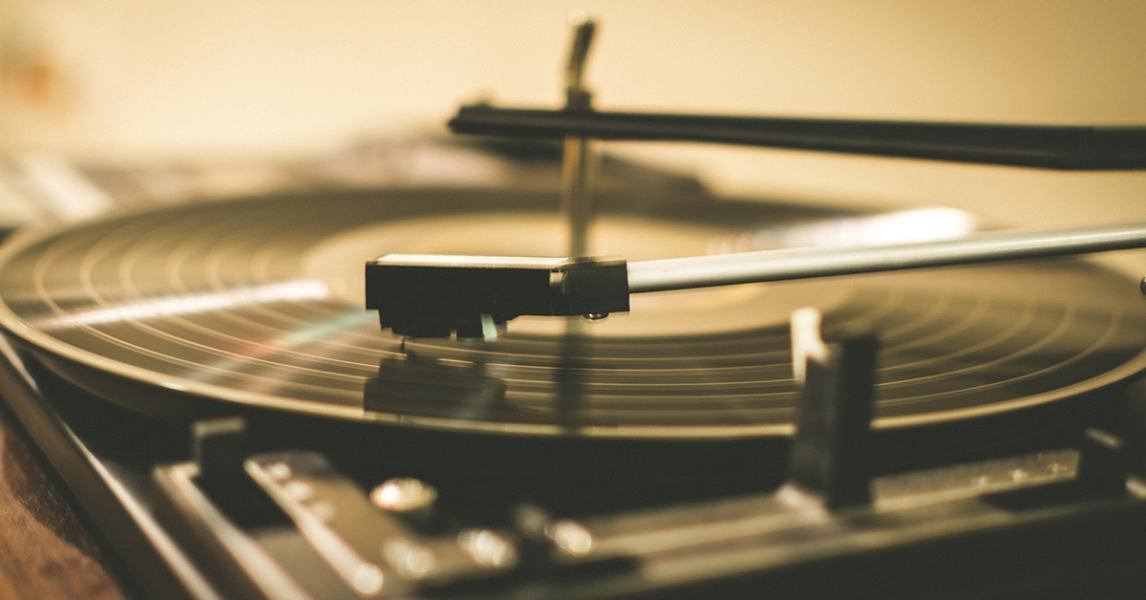 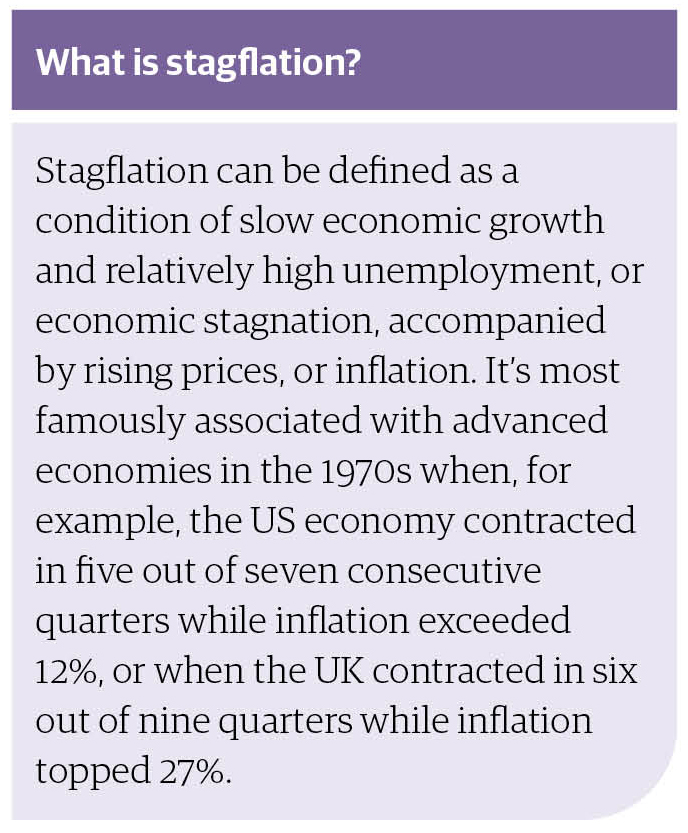 Some of our older readers may be experiencing some uncomfortable déja vu. Classic hits from the 70s are on the radio, Vogue has just run an article saying the platform boot is de rigueur this season, oil prices have gone through the roof – in part due to a war – and inflation is alarmingly high. Are we in for an economic rerun of the 1970s, with a prolonged period of weak equity-market returns and economic ‘stagflation’ (sputtering growth and spiralling prices)? We don’t think so, and here’s why.

Today the oil price has almost doubled in just a few months. In 1973-4 the Yom Kippur War and the ensuing Arab/OPEC oil embargo caused the oil price to triple in a similar span of time. But it wasn’t just about oil, US inflation had been above 4% for the majority of the five years before fighting broke out between Israel and the coalition of Arab states, and breached 6% briefly in 1969 (and in the UK 9% in 1971). In other words, persistently high inflation had become endemic long before the oil shock, not for the 10 months or so it’s been today. So how did it become so entrenched?

Economic historians have shown that the data central banks and their Treasury departments were working with in the early 1970s very significantly overestimated the amount of spare capacity in the economy – the difference between what the economy was capable of producing at full employment, without overheating, and what it was actually producing. By overestimating this spare capacity, the US Federal Reserve (Fed) and the US Treasury were therefore underestimating the inflationary effects of their policies.

After the 1970s debacle, the Congressional Budget Office established a unit to independently estimate the output gap. Forged in an inflationary crisis, they have almost invariably underestimated spare capacity ever since. Their estimates aren’t perfect, but today they think that the US economy is already operating above capacity.

It wasn’t just bad data. In the 1970s, the prevailing ‘Keynesian’ way of managing the economy – a belief that consumer and business demand was the main driving force and where expansionary government spending was to rise if it faltered – did not understand the role inflation expectations play in wage and price setting and therefore struggled to explain why inflation could stay so high while unemployment also rose. Prevailing theories only explained the short-term relationship between inflation and unemployment. For example, say the government decided to embark on an expansionist monetary policy to incentivise consumption. Unemployment is reduced through this economic stimulus package, and the trade-off is some inflation. However, after a short period, people begin to associate expansionist policies with inflation.

Government and central bank policymakers (the latter not independent from political interference like today) delivered woefully inappropriate responses. While the appropriateness of monetary and fiscal policy over the last couple of years could be debated, fiscal policy is very significantly contractionary in the US and UK this year. Monetary policy is on the move too. In his Congressional hearing last week, Fed Chair Jay Powell declared he was today’s equivalent of Paul Volcker, the 6 foot 7, cigar-chomping Fed Chair who finally restored the central bank’s credibility in the early 1980s, not Arthur Burns, Presidents Richard Nixon and Gerald Ford’s impuissant Fed chair between 1970 and 1977.

Certain countries made matters worse. Some, such as the UK, encouraged a private sector borrowing binge with de-regulation. In the US, Nixon started a bout of protectionism, under the guise of helping domestic industries, but it served only to raise input prices and, in turn, output prices further. Nixon also abrogated the Bretton Woods currency management system, which was like a gold standard of sorts: the dollar devalued which meant that import prices soared. Even in countries whose currencies appreciated as a result, inflation became less well-anchored because there was no longer an international institution enforcing a “credible commitment” to economic rectitude.

Underlying the fact that inflation is as much an institutional phenomenon as anything else (the 1920s in Europe also proved this) countries that held on to more conservative fiscal and monetary policies, such as Germany and Switzerland, were relatively unscathed by the 1973 oil shock and runaway inflation in general. In fact, Swiss inflation fell from the mid-1970s, while countries such as the UK or Italy that made the biggest policy mistakes fared the worst.

Today lending is tightly regulated and there are no currency regimes to be broken. We don’t see evidence of significant institutional failure, and we believe that as long as our institutions remain credible, the chance of inflation spiralling out of control is very low because they anchor inflation expectations. Today, medium-term inflation expectations are still at (for consumers) or below (by market-based measures) where they were between 1995 and 2010, and a fraction of what they were 45 years ago (we don’t have great data for the early 1970s).

We also know that high prices are making consumers less likely to make significant purchases today, in stark contrast to the 1970s (see figure 1 below from the long-running University of Michigan survey on this question). As the chart shows, consumers in the 1970s thought that the price rises they were experiencing were likely to continue long into the future, and therefore it was better to buy a big ticket item ‘today’. Consumers feel the opposite today.  In other words inflation is likely to curtail demand and therefore become self-limiting.

Figure 1: Consumers are showing restraint as inflation heats up 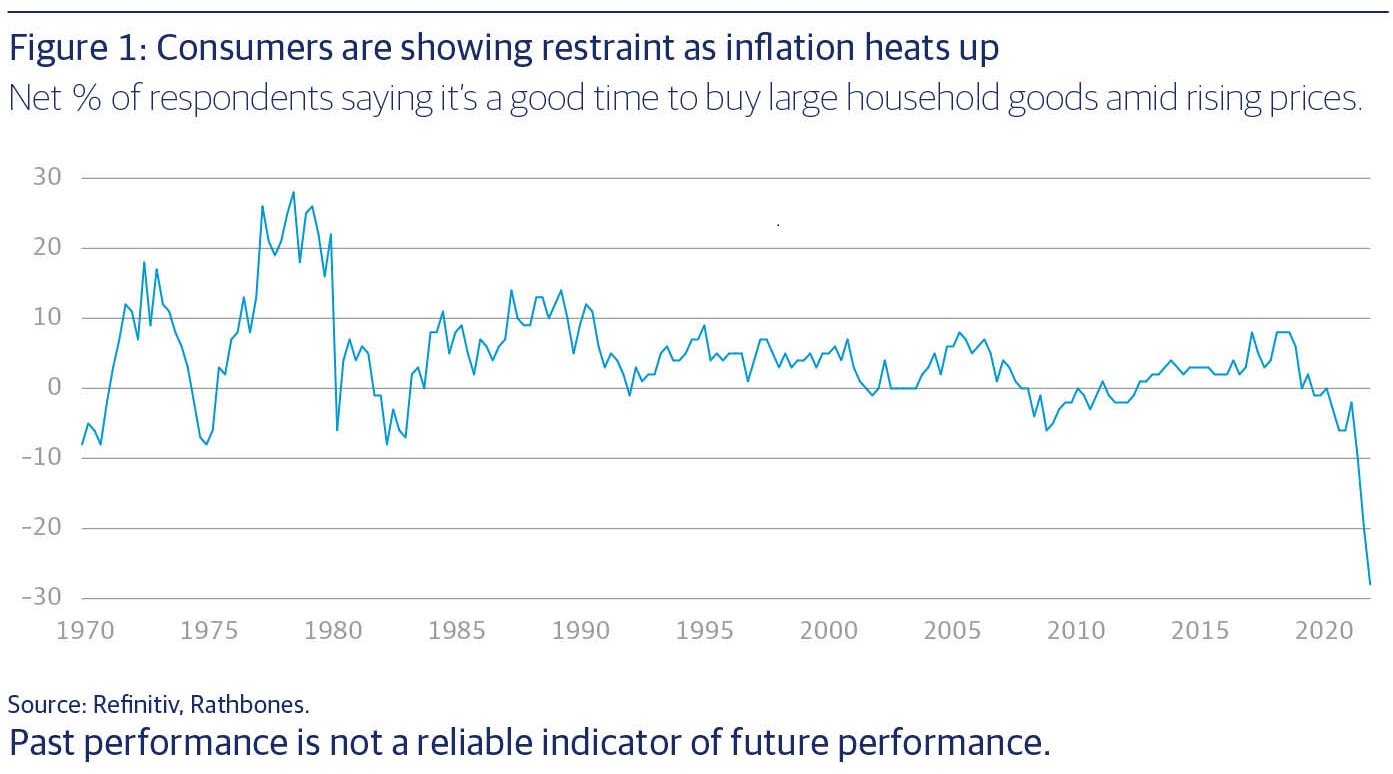 That’s not happening today and we don’t expect it to start. Not least because labour market institutions are different – there are few inflation-indexed wage contracts, labour movements are weaker and so is bargaining power, for example look at below-inflation wage settlements in collective bargaining in Germany.

“The bottom line is that the 1970s was a period of extraordinary inflation. If you look at a chart of UK inflation going back a few hundred years, the 1970s was the anomaly, not today.”

There are many other structural factors that militate against runaway inflation – demographics, wealth inequality, technological change – too many to go into in the space we have here.

The bottom line is that the 1970s was a period of extraordinary inflation. If you look at a chart of UK inflation going back a few hundred years, the 1970s was the anomaly, not today (see figure 2 below). Even if our base case of fading inflation turns out to be wrong – and the risks are of course rising – the 1970s were really quite unlike today and unlikely to be repeated.

Today’s outlook for inflation suggests that bond yields could keep rising for a while, which could favour cheaper ‘value’ stocks over their more expensive ‘growth’ peers – rising bond yields make those expected future profits less valuable today. That said, we believe that growth companies with high-quality, highly profitable and inflation-resilient business models are still attractive. While the future is very uncertain, when economic growth has been weak or negative and inflation has been high in the past, companies found in more defensive sectors such as pharmaceuticals or food and drug retail have done well. But so have miners and certain industrial companies that are able to pass on rising input costs. 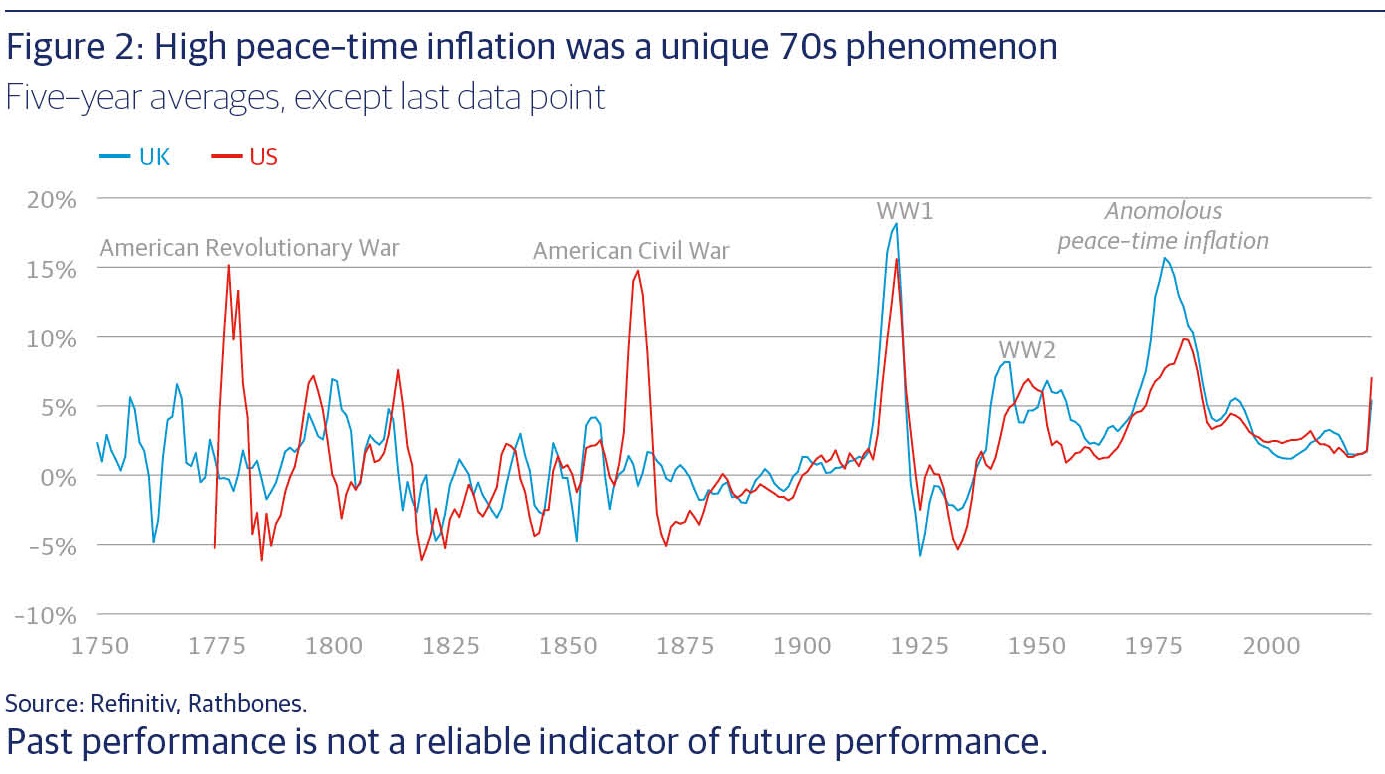 Listen to Rathbones’ co-chief investment officer Edward Smith explain why we don’t see an economic rerun of the 70s.