Risks of higher inflation and slower growth have gone up, and so too have the number and degree of uncertainties around the investment implications. 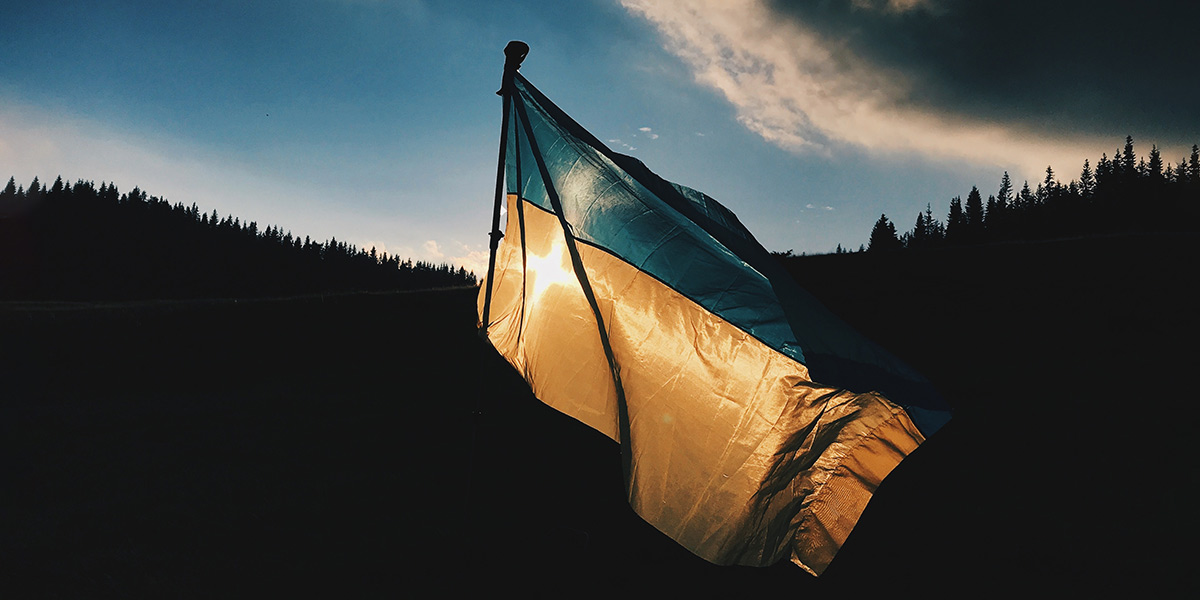 The events happening in Ukraine first and foremost provoke our deepest sympathies for the human suffering that is being brought about. We also have a duty to our clients to monitor the economic and market impact and keep you informed about the investment implications. What seems clear to us is that the conflict has increased both the upside risks to inflation and the downside risks to global growth. But given multiple uncertainties around how this conflict will play out and what the precise investment implications of these risks will be, we believe it would be dangerous to make any outsized directional calls for the time being.

Some reduction in overall portfolio risk, particularly from overseas equities and emerging market debt, does make sense to us in response to the fallout from Russia’s invasion of Ukraine, while increasing allocations to safer assets such as gold and cash.

The main channels of influence

We believe there are four main channels through which the conflict may influence the global economy in the coming months, with varying degrees of importance, as we discussed in more detail in a previous InvestmentUpdate.

First, the potential implications for global demand. Tough sanctions and the collapse in the rouble are likely to induce a deep recession in Russia’s economy. Meanwhile, Ukraine’s economy will suffer as a direct result of the invasion. This will have knock-on implications for demand elsewhere, especially in Europe. But the impact outside of Russia and Ukraine may generally be limited. Russia’s economy accounts for less than 1.5% of global GDP, and the country has been reducing its dependence on imports since its 2014 annexation of Crimea. It is not a major source of global export demand, accounting for less than 5% of EU exports, and less than 0.5% of the US’s.

"Russia’s economy accounts for less than 1.5% of global GDP, and the country has been reducing its dependence on imports since its 2014 annexation of Crimea."

Global demand could also be hit with a confidence shock, curtailing consumer and business spending. A further squeeze on real incomes from higher commodity prices, which we discuss below, could hurt consumer sentiment. On business confidence, the latest data has been rather reassuring, albeit collected before the outbreak of war last week. Measures of business activity and sentiment in the developed markets, like purchasing managers indices (PMIs) and Germany’s Ifo survey, have rebounded strongly as post Omicron reopening gathers pace. Fourth-quarter earnings have also been strong, beating estimates by more than the average in Europe. Earnings momentum (the change in measures of forward-looking earnings estimates) has slowed, but remains positive and actually quite elevated relative to the standards of the last decade.

The second main channel of influence is possible financial contagion effects. Sanctions already seem to have dealt a serious blow to Russia’s banks, with customers queuing to remove their cash. Fortunately, US banks have minimal direct exposure to Russia, having reduced it significantly since 2014. Some smaller European banks have more. Overall, though, exposure is limited (less than 1% of total assets in every country bar Austria), and on balance this does not seem like a systemic risk.

Third is the threat to energy supply. Russia is a key global energy producer, accounting for 12% of global oil output and 17% of natural gas output. Europe is extremely reliant on Russian energy and could not easily replace it in short order. (EU countries import around 60% of their energy, and Russia is the single largest provider of oil, coal and gas. EU gas supplies could run out in an estimated six weeks without Russian supply.)

Past geopolitical crises which have hit global energy supply hard (the 1973 Yom Kippur War/OPEC embargo, the 1979 Iranian revolution and Iraq’s invasion of Kuwait in 1990) have contributed to recessions and higher inflation across major economies. Two of those events were accompanied by bear markets in global equities, and disappointing performance from US Treasuries, normally a safe haven of choice for global investors. (see figure 1).

So far, energy exports have continued despite the conflict, with Russian gas still flowing to Europe. The strict sanctions imposed on Russia’s financial institutions contain specific carve-outs for trade in energy. This appeared to be a condition for many EU states supporting Russia’s expulsion from SWIFT, the interbank communications network – they are too dependent on Russian gas to do otherwise. Russia also has a financial incentive to keep energy exports going. Sanctions on its central bank mean it now can’t access most of its foreign exchange reserves, which are held at other central banks or rely on foreign commercial institutions to liquidate, so it has few other sources of hard currency. Even so, we can’t entirely rule out Russia deliberately cutting its energy exports if the conflict escalates further. An energy shock remains a key ‘tail risk’, one with a low probability but potential for a very significant negative impact.

Last but not least are the risks to the supply of other commodities. Ukraine accounts for 13% of global corn exports and 12% of wheat exports. There are already reports of shipments being disrupted, and prices have jumped to multi-year highs, which will contribute to inflationary pressure around the world. Meanwhile, Russia is a major supplier of industrial metals, most notably aluminium, nickel, platinum and palladium. While the sanctions imposed on Russia’s banks include exemptions for energy trade, that’s not the case for metals. As a result, significant supply disruption is possible, again with inflationary consequences globally, albeit not to the same extent as energy prices – the contribution of raw materials to core goods and services prices is small.

As to whether the risk of slowing global growth will act as a brake on central bank plans to raise interest rates or rising inflationary pressures will induce more tightening than previously anticipated remains uncertain – we believe there are significant risks in both directions. Central banks tend to look through commodity supply shocks, but they have responded in the past when the inflationary backdrop is already pressured (like the oil shocks highlighted above) by tightening policy aggressively, focusing more on the inflationary implications than the damage to growth.

So far, monetary policymakers in general have said little about how they view the current conflict. But Mary Daly, President of the San Francisco branch of the US Federal Reserve, has indicated that she is most concerned about the implications for demand. That suggests that she might view an escalation of the conflict as a reason to hike rates less, not more.

"The EU is also likely to reduce its dependence on Russian energy, probably meaning a more costly energy mix in the transition period. "

There are also potential medium to long-term implications to consider. Military spending in Europe is likely to increase. In a historic policy shift, Germany this past weekend announced a €100bn boost to defence spending, and that spending would exceed 2% of GDP (compared to about 1.5% now) further ahead. Other EU countries may follow suit. The EU is also likely to reduce its dependence on Russian energy, probably meaning a more costly energy mix in the transition period. Germany has already announced the cancellation of the Nord Stream 2 pipeline intended to increase the flow of gas from Russia, and it plans to build new liquid natural gas terminals to replace energy supplies coming from Russia. Finally, there’s a huge range of future geopolitical risks. These include cyberattacks and even conflict beyond Ukraine, the consequences of large flows of refugees (with an estimated 500,000 people displaced already), and potential political instability in Russia (where anti-war protests have taken place).

There is huge uncertainty about the outlook, and some of the factors we’ve outlined here are extremely hard to quantify in a meaningful way. But on balance, the greatest risks appear to be to the global supply of key commodities (more so than to demand). With that in mind, we believe Russia’s invasion has skewed the risks to the upside for inflation and to the downside for global economic growth. Central banks in major economies, particularly those already struggling with above-target inflation, are walking a tightrope – facing weakening growth and persistent price pressures, they could easily make a policy error in either direction.

On Monday the MSCI World global equity index was higher than it was a month ago. One might conclude that a broad-based shock to economic or investor sentiment has not been priced in. But if you look at the performance of cyclical stocks or sectors (those that are more sensitive to economic cycles) relative to defensive ones, that’s been consistent with a severe slump in leading economic indicators. Europe and particularly its cyclical sectors have been hit harder, giving back the outperformance they built up in January. Institutional managers’ equity exposure has fallen to a level not seen since the spring of 2020, while some indicators of investor sentiment are at levels that have been good contrarian buy signals in the past if a recession is not around the corner.

"While not our base case, the conflict in Ukraine and resultant sanctions do increase the risk that a recession is around the corner in Europe."

While not our base case, the conflict in Ukraine and resultant sanctions do increase the risk that a recession is around the corner in Europe. Moreover, if a recession is not around the corner, we can’t be certain that central banks, faced with increased inflationary pressures, wouldn’t proceed more aggressively with rate hikes than currently expected, leading to market falls regardless. Market-based interest rate expectations had become high, particularly in the UK where the Bank of England had started to try to talk them down, but the point is that there is considerable uncertainty.

It's also very hard to predict regional market impacts. The European economy appears most exposed to the conflict, both directly and indirectly, and its stock market’s earnings are more cyclical. But inflationary pressures there are weaker than in the US, its central bank more dovish (there is less risk than in other developed markets of an inflationary spiral from large wage increases in response to rising prices) and its equity markets have large weightings in cheaper ‘value’ stocks, which are less sensitive to interest rates and could benefit from higher energy prices. Similarly, the US is attractive for its more defensive earnings, but this may be more than offset by the far broader risks to inflation and interest rates.

Again, uncertainty is the key word, and as such we believe it makes sense to avoid taking large active, tactical positions and to stick to long-term, strategic allocations.

Even prior to the conflict in Ukraine, our view was that it made sense to avoid any significant biases towards overvalued growth stocks, and to steer clear of stocks that score poorly on measures of earnings quality. The rationale for that advice is even stronger now than it was then. We believe that ‘growth’ companies with high-quality and highly profitable business models should continue to be a part of our investment strategies, but that exposure should be balanced. There’s even more reason now to think that the initial recovery phase of the economic cycle, in which lower-quality stocks tend to outperform, is well behind us. The outlook for inflation suggests that yields on longer-term bonds could keep rising for a while. This would favour value stocks over more expensive growth companies, as those rising rates make earnings further out in the future less valuable today.