The petrol crunch has caught out Will McIntosh-Whyte, our multi-asset portfolios fund manager, much to the glee of his electric car owning stepfather. 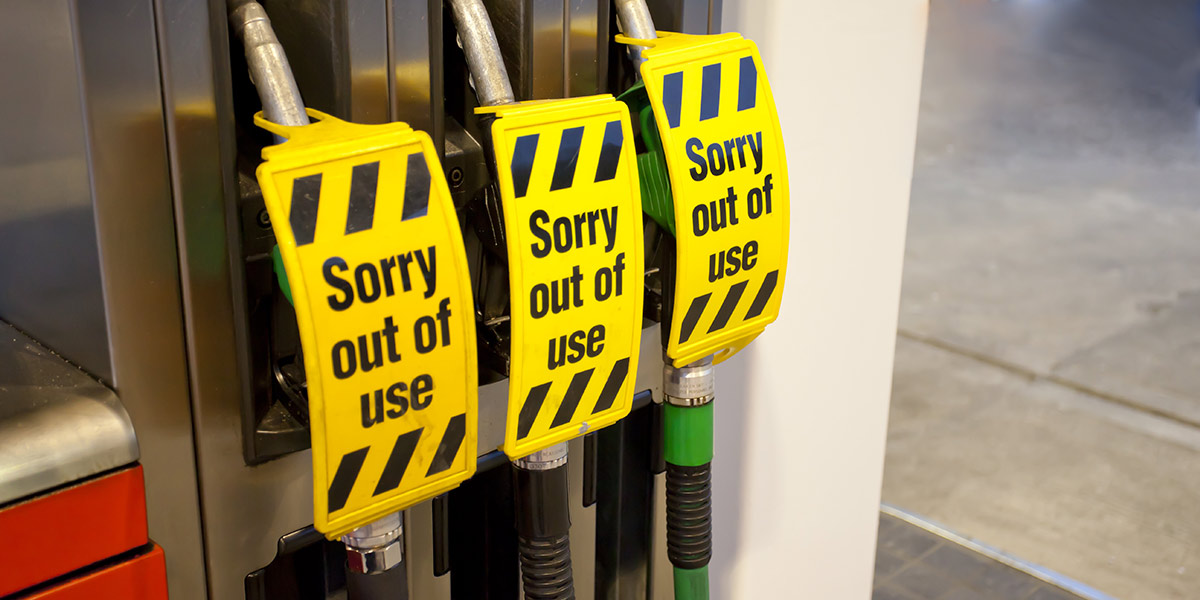 I joined the queues last Friday.

In my defence we were genuinely low on petrol. And I left the jerry can at home – the lawn will have to wait. It meant I was late for dinner at my Mum’s, much to the delight of my stepfather who has been waxing lyrical about his Nissan Leaf the last couple of years and, being an extra couple of beers down due to my lateness (any excuse), revelled in his green credentials and energy foresight.

Forecourts around the country have been running dry due to the lorry driver shortage that has plagued the UK for some time. Autonomous trucks can’t come soon enough! Instead the army is once again lined up at the ready as fuel tanker drivers – having previously been touted to drive food delivery lorries and ambulances. God forbid we are invaded by the Russians.

The day-to-day impact of this crisis is not immaterial, with workers, essential and otherwise, struggling to get petrol to get to work. Another drag on economic activity, which is doing its best in the face of lingering COVID-19 and supply chain problems. There is (supposedly) not an actual fuel shortage (there’s plenty at the refineries and in storage); it’s panic buying causing the problem. Almost akin to a run on the bank – there is enough cash to go around for typical demand, as long as everyone doesn’t line up at once to withdraw their life savings (i.e. fill up their jerry cans).

Adding to energy woes prices at the pump are going up with the oil price, and energy bills are squeezing higher as natural gas prices soar. The latter being the subject of much debate, with a lack of wind in the North Sea and supply disruptions from Norway and Russia touted as the guilty parties. It’s interesting to note a distinctly muted response from many larger American shale drillers to higher energy prices, where extra supply would usually help keep prices contained like it has done in the past. Add these issues to problems in the labour market and it all feeds into the inflationary narrative. It was telling to hear for the first time the Bank of England (BoE) warning that inflation may be a bit more persistent than previously thought. As we discussed in the July episode of our podcast The Sharpe End, while ‘transitory’ has been the watchword of 2021, the term has never been defined.

The BoE’s latest noises suggest potential monetary policy tightening in the face of these pressures and rising inflation expectations. While on the face of it sensible, many of these factors are driven by supply issues and factors external to the UK. Rate hikes in this environment may have more of a drag on a fragile economy than on inflation. Rising energy prices in themselves act as a policy tightening instrument, with higher prices at the pumps and on energy bills reducing consumers’ disposable income, and so can actually become a deflationary force. It would be more sensible to wait for supply chain issues to iron themselves out and see how the inflation environment looks then. With the long-term disinflationary drivers of demographics, debt and technology still present, longer-term runaway inflation still feels unlikely. Besides, with the amount of debt in the global system, didn’t we all decide not so long ago that a bit of growth and inflation might not be such a bad thing? Perhaps the BoE is simply tipping its hat to those inflationistas, signalling that they won’t let inflation run amok. Much like former European Central Bank President Mario Draghi managed to ease concerns over the Eurozone by telling investors he would do ‘whatever it takes’. The result of Mr Draghi’s promise, of course, being that he didn’t actually have to do all that much. I’m not sure I have quite the same confidence in the current monetary administration in the UK.

Protecting portfolios in this uncertain environment is no easy feat. A rising oil price stokes inflation, with bond yields rising alongside, meaning no help from government bonds. Equities sell off, with growth names bearing the brunt. Financials can help, as they benefit from a steepening yield curve (they can lend out money at higher rates than they pay short-term depositors), and other more cyclical businesses typically perform better too. Oil’s clearly the better hedge, although that’s not an option for our sustainable funds.

Certainly in the selloff we have seen this past week cyclicals and financials have generated some positive performance. Although both largely assume a relatively benign economy because any economic downturn would hit cyclical businesses hardest of all. Any central bank policy error or stubbornly high energy prices could knock these companies off course. And it was only last week that these very same names were taking a pasting in the face of a possible Evergrande default and the contagion that may bring. What a difference a week makes.

Put options (still out of the money) and some structured products we have bought this year should help at the margin (particularly the one designed to benefit from increased volatility in bond yields). But in this environment, I believe investors’ most-hated asset – cash – is king. Not for the long term mind you, with inflation at elevated levels, but to have some dry powder to put to work as yields rise and equities stumble. We think this will allow us to at least maintain equity positioning in any weak periods, which we will look to do in a disciplined manner.

In the meantime, I will be staying relatively house bound in case the ‘non-shortage’ lasts a bit longer than we hope. Maybe it is time for that electric car? I wonder how many others are thinking the same thing.