Home › Insight › How quickly will the world recover from the coronavirus pandemic? 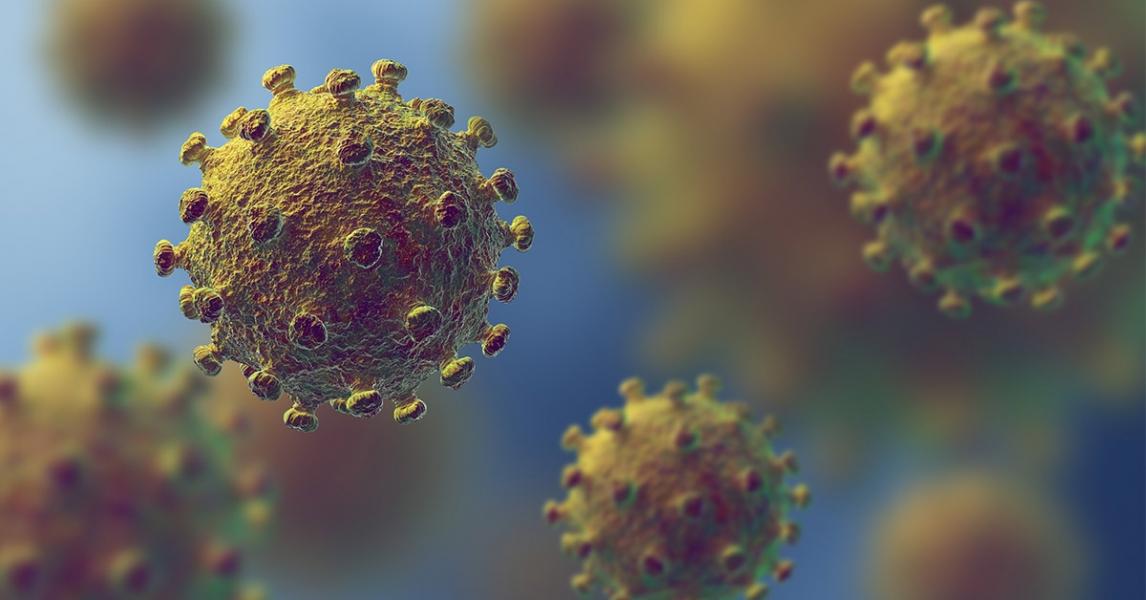 The global economy is waking up from its medically induced coma as lockdown measures to combat the spread of COVID-19 are eased. With high levels of unemployment, ongoing social distancing measures and the risk of a second wave, what will economic activity look like over the coming months?

What may seem surprising is that by the end of June global stock markets were almost back to the record highs seen at the beginning of 2020. In an environment of such uncertainty about the long-term economic effects of coronavirus, as well as risks posed by US—China trade tensions and the US presidential elections, are investors being overly optimistic?

It’s important to remember that equity markets typically anticipate turning points in the economy by three to six months. If this recession only lasts two months (March and April), then the recent moves in stock markets make sense. But we don’t know that for sure — there could be a second wave of COVID-19, or the economic healing process could be slow and stuttering.

We don’t think it’s likely to be as smooth as the equity markets seem to be anticipating. It’s important for investors to remain grounded by the probabilities — by what we don’t know — and we would put the chances of such a rapid ‘V-shaped’ recovery at 50:50. So we think it makes sense to protect portfolios against the risk of another leg down, even though it’s not a certainty.

Though new cases continue to decline in the developed world, they have started to rise exponentially in emerging countries (especially India and Brazil). Major economies are too globally integrated for a full recovery to occur without a meaningful abatement in the virus, and the restrictions to activity that it has brought on, across all countries.

Markets have also been supported by the extraordinary stimulus from central banks and governments, which has been impressive in its speed, scale and scope. This is important because the greatest historical failures to recover from a major economic shock were characterised by a lack of such action; for example in the Great Depression of the late 1920s and Japan’s prolonged deflationary bust that began in the early 1990s.

"The good news is that coronaviruses appear to be less susceptible to second or third waves compared with influenza outbreaks, because coronaviruses mutate to a lesser extent."

Yet the stimulus can only do so much, and it’s likely that second-quarter UK GDP will contract by the most since at least 1946. We estimate that the UK economy contracted by 25% in March and April.

Where we go from here is subject to huge uncertainty. In our most optimistic scenario, we don’t expect the level of output seen in February 2020 to return until September 2021. If there’s a second wave and just one more month of lockdown, much of the economy’s lost output could become permanent.

The good news is that coronaviruses appear to be less susceptible to second or third waves compared with influenza outbreaks, because coronaviruses mutate to a lesser extent. Yet even without a second wave, it may take some time for business to spring back. The IMF estimates that the UK economy will contract by 10% in 2020, more than advanced economies in aggregate, before rebounding by about 6% next year (figure 1). 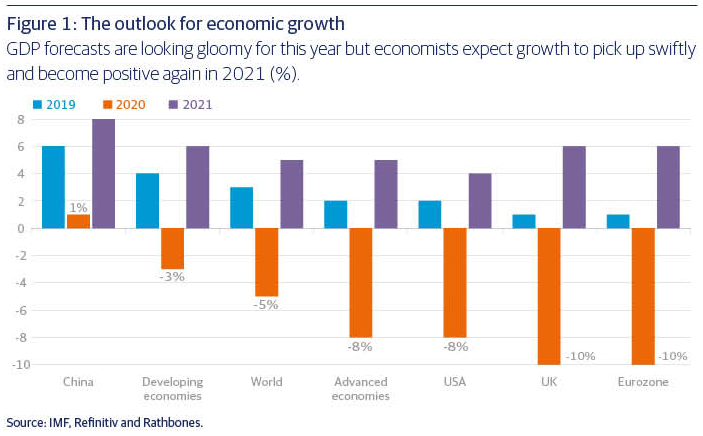 However, the IMF highlights some downside risks to this scenario, which as noted above we only think has a 50:50 chance of coming to fruition. Yet even in a pessimistic scenario, it seems unlikely that recession would continue for 19 months, as it did in the US between 2007 and 2009 amid the global financial crisis.

The Bank of England (BoE) and Office for Budget Responsibility, the Treasury watchdog, have released some of the gloomiest forecasts. They believe unemployment will stay much higher for longer, and households will save a much higher proportion of income and profits than normal. We’re not convinced such bearishness is warranted, but we agree that the economy is unlikely to be derailed by high inflation, which would cause authorities to rein in stimulus.

Taking stock of the risks

Inflation is only a risk if there’s a V-shaped recovery, and even then it’s far from certain. The history of pandemics suggests they affect demand for goods and services more than they affect the ability to supply them. Less demand relative to supply is disinflationary.

Most advanced economies have struggled to get inflation above the 2% inflation target over the last decade despite printing more money. That’s because a large increase in the supply of money doesn’t necessarily lead to inflation — there could be other obstacles affecting how quickly the money is spent. For example, firms may need to repay the debts they’ve incurred during this period.

The other big risk to the economic outlook is that unemployment will stay higher for longer. UK unemployment data is published with a lag, but we know from the data on universal credit and other benefits claims that the headline unemployment rate is likely to be around 8%. While the furlough scheme has helped curb unemployment, there’s a chance that firms may have no choice but to dismiss staff when the support schemes are withdrawn.

The US government has taken a different approach — focussing on replacing income lost temporarily through layoffs instead of trying to preserve jobs, while putting in place incentives for firms to re-employ staff in the second half of the year. The US unemployment rate is much higher, already reaching 15%, but excluding those members of the workforce registering as ‘temporarily laid off’ would take it closer to 3%.

Risk is not a certainty. We think investors should remain broadly invested with defensives in place to guard against uncertainty. Equity valuations fell a long way, but they’ve risen a long way too. We believe there are still returns to be made over the long run and it’s important to remember that markets rarely stay down for long, even in years with huge drawdowns, such as 1976, 1987 or 1998. 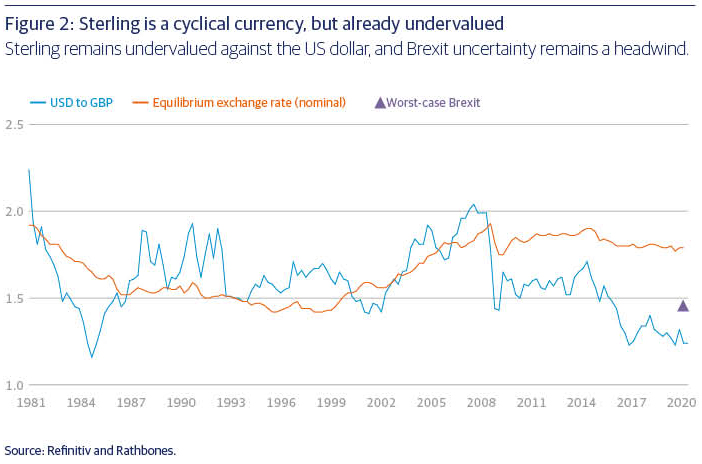