The positive performance of DFM over time

The immediate impact of adopting a discretionary fund manager (DFM) on adviser businesses and clients is now clear to see as a result of the Value of DFM report, but what do we know about the effect over the long-term? 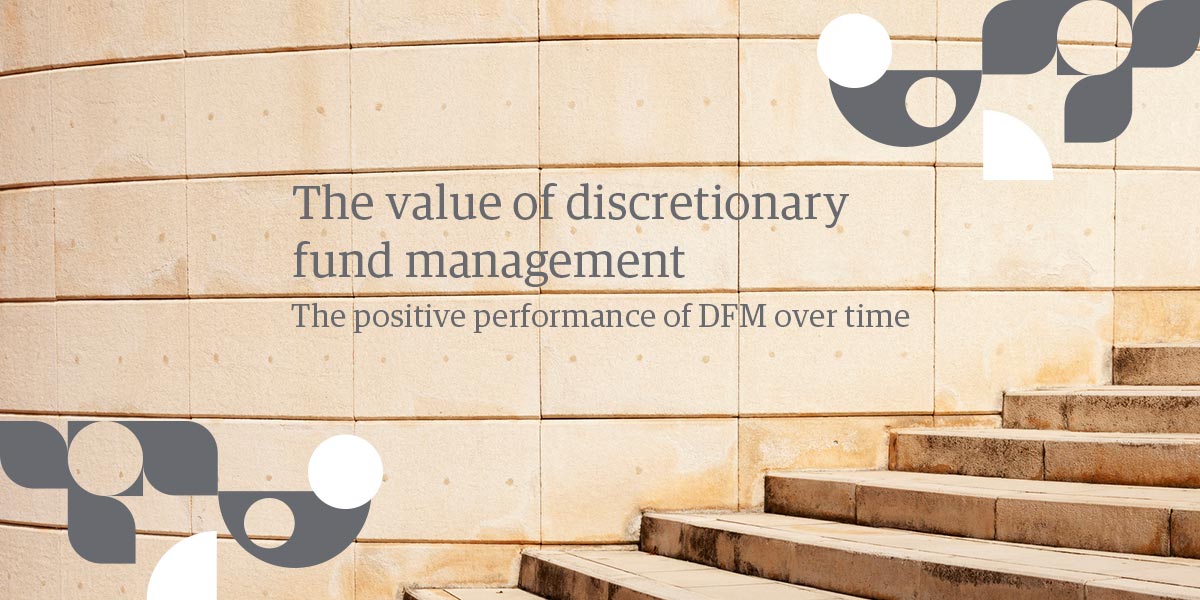 While the report enabled us to examine the benefits of adoption on advisers for the first time, there remained another gap in knowledge to address – how adviser businesses were affected over time and what advantages did it offer.

By digging deeper into the results of the survey of 100 advisers we found one clear message, that the benefits of a DFM to an adviser are in no way short-lived.

To examine the impact over time, the survey broke down the results into two groups, those that had used a third-party for more than six years – a group we have dubbed the ‘early adopters’ – and those that took on a third-party between one and five years ago – the ‘recent adopters’.

The results reinforced the view that handing over investment management to an external party and freeing up adviser time has significant long-term benefits for all aspects of the business and its clients.

Early adopters were shown to have, on average, around 21% more clients than more recent adopters and also reported a greater number of clients with more than £500,000 of assets (35% against 29%). As a result, early adopters reported a greater level of satisfaction with the composition of their client base. 83% said they were happy with the wealth of their clients against 73% of more recent adopters. A clear increase as time goes by.

With less time spent on managing investment pots, all advisers that had adopted a third party manager said they spent more of their working week meeting existing clients. However, early adopters were able to spend even more time with existing clients than more recent adopters – suggesting the advantages here are only amplified over time.

In previous posts we have revealed the vast improvements in investment performance reported by 72% of all advisers surveyed, with 81% of advisers saying performance was the most important factor they considered when looking to adopt a DFM in the first place. Yet, again by splitting the survey into early and recent adopters, we find the benefits of enlisting a DFM in terms of improvement to performance grow over the years.

This trend is mirrored across every aspect the advisers were quizzed about.

Quality of client contact and trust continued to improve in the years following adoption of a DFM, suggesting the benefits of the structure become clearer and more tangible over a longer time period.

More early adopters also reported improved contact with clients and felt a greater level of trust with them.

Importantly, nearly 10% more early adopters than recent adopters said they believed revenues from existing clients had increased as a result of their being able to spend more time with them.

Increased trust, contact and improved investment performance all translates into higher revenue and a broader, wealthier client base for advisers, and again the benefits appeared to increase the longer an adviser had partnered with a DFM for. Early adopters even received greater salaries around 17% and 13% higher than recent adopters in 2016 and 2017 respectively.

While the benefits of adoption to adviser business models are clear regardless of when they were adopted - something we can only analyse for the first time thanks to the Value of DFM report’s findings - it is by digging into the survey results we can find the benefits only increase with time.

The journey from first introducing a DFM to an adviser’s business to reaping the rewards of the structure can take some time, not all benefits will be clear to see in the initial days, but what the survey offered is an in-depth look at how those benefits continue to impact adviser businesses further down the line. Better yet, those benefits appear to only amplify as time goes by.

Download the second chapter of our DFM research report - The value of discretionary fund management.